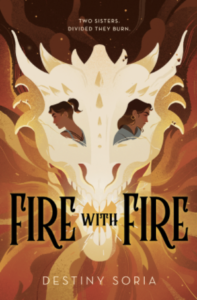 Summary: Dani and Eden Rivera were both born to kill dragons, but the sisters couldn’t be more different. For Dani, dragon slaying takes a back seat to normal high school life, while Eden prioritizes training above everything else. Yet they both agree on one thing: it’s kill or be killed where dragons are concerned.

Until Dani comes face-to-face with one and forges a rare and magical bond with him. As she gets to know Nox, she realizes that everything she thought she knew about dragons is wrong. With Dani lost to the dragons, Eden turns to the mysterious and alluring sorcerers to help save her sister. Now on opposite sides of the conflict, the sisters will do whatever it takes to save the other. But the two are playing with magic that is more dangerous than they know, and there is another, more powerful enemy waiting for them both in the shadows.

Review: [This book contains anxiety/panic attacks and graphic violence (including torture and murder).]

FIRE WITH FIRE is a book I seriously wish had been around when I was a teenager. Biracial Latina sisters Dani and Eden Rivera training from childhood to join the family business of dragon slaying? My fantasy-loving teenage self would have spontaneously combusted from joy, and I’m still thrilled I got the chance to read it now. Author Destiny Soria put a little bit of everything in this book: sibling conflict, figuring out who you are/want to be, cat-and-mouse games, romance, and—of course—dragons!

I really enjoyed Dani and Eden as our narrators, especially since they often don’t see eye-to-eye. I understood Dani wanting to do her own thing and not prioritizing her dragon-slaying talents despite family expectations, and I totally got why Eden would be so frustrated by that, especially when she was taking things seriously and still falling short of Dani’s natural talent. Even before a dragon and magic come between them, the sisters’ dynamic felt very real and occasionally heartbreaking. It was always interesting to see them from each other’s point of view and realize how close to/far off the mark they are. Your enjoyment of this book is likely to hinge on if you can sympathize with both of them (and I am happy to report that I did!).

FIRE WITH FIRE moves quickly and expects its audience to keep up, which I enjoyed. Sometimes fantasy books set in the modern world have a difficult time integrating the two, but I had no trouble believing that the Rivera family were part of a small group of dragon hunters, ever vigilant for the growing-closer-to-extinction-each-day dragon-kind. It was nice to see that the Rivera parents had day jobs, Dani had a summer job, and Eden was taking college classes. That retreat to a (mostly) normal home made the adventures with dragons and sorcerers all the more spectacular—and there are some fantastic confrontations and fights in this book.

While I largely view FIRE WITH FIRE as an adventure story, we do have some romantic subplots that support the main action. Dani is canonically bi (and has to deal with the first girl she ever kissed coming back to town), and both sisters have their own romantic subplots. I do wish we had gotten just a little more of Eden’s developing romantic relationship, though I will admit that prioritizing Eden’s relationship with her sister and herself was the better narrative decision.

Recommendation: Get it soon if you’re in the mood for a contemporary fantasy. FIRE WITH FIRE is a fast-moving book with a sibling relationship at its heart and a lot of fun adventures running through it. This is the first book I’ve ready by author Destiny Soria, and I will definitely keep an eye out for her next project.