In support of Banned Books Week, all of us contributors will be sharing a favorite challenged book and why we love it so. Today, K. Imani reflects on two banned books she’s used in her classroom. 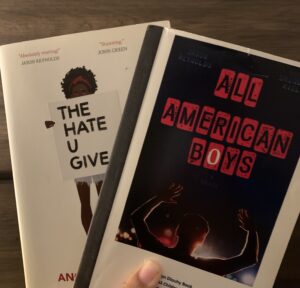 I wanted to reflect on the banned books that I’ve actually taught. The first was All American Boys which I knew I had to teach the minute I finished reading the first chapter. I knew my students would connect with both characters and the events of the novel and I was right. They got into discussing the book and even my more reluctant readers tore through it. I even had one student who just sat one weekend and read the book instead of playing video games because he was that into it. He admitted to me that All American Boys was the first of my books he really read and enjoyed.

When The Hate U Give came out I taught it instead of AAB and THUG was a huge hit among my students (and staff!) Students were in the hallways reading the book, many finished the book before my carefully planned out schedule, and they all got into the fact that teenagers can protest and bring about change. As we were reading the novel, the Parkland shooting happened and the protests by the students inspired my students. Seeing Starr find her voice allowed my students to also find their voice and that group of students became my most vocal, most political class to date.

A lot of times books by authors of color are banned due to racist themes, and anti-police themes, and other nonsense because parents feel their “children” can’t handle it. Well, children of color don’t get the space away from racism, and LGBTQ children don’t get space away from homo/transphobia. They live it everyday and they need to be able to see their stories taught, discussed, reflected upon, and to have their voices heard. Books like All American Boys and The Hate U Give deserve to be in the classroom and I am glad to have taught those books.

In case you’re curious, the banned book I’m teaching this year is Stamped.