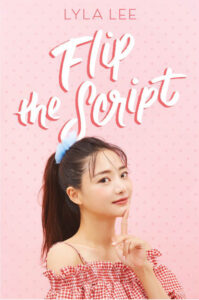 Summary: The first rule of watching K-dramas: Never fall in love with the second lead.

As an avid watcher of K-dramas, Hana knows all the tropes to avoid when she finally lands a starring role in a buzzy new drama. And she can totally handle her fake co-star boyfriend, heartthrob Bryan Yoon, who might be falling in love with her. After all, she promised the TV producers a contract romance, and that’s all they’re going to get from her.

But when showrunners bring on a new lead actress to challenge Hana’s role as main love interest—and worse, it’s someone Hana knows all too well—can Hana fight for her position on the show, while falling for her on-screen rival in real life?

Lyla Lee’s FLIP THE SCRIPT was an absolute blast to read on a summer evening. It’s a short, fast-paced book that I devoured in one sitting, and I’m happy to say that if you’re in the mood for some good, trope-y fun, you should give FLIP THE SCRIPT a chance. You’ve got fake dating (with an actual legal contract!), friends-to-(on-screen)-rivals-to-lovers, secret dates, holding hands while running away, love triangles, and more. As someone who enjoys K-dramas, there are several meta moments that make the book even more entertaining. (Also, I was delighted by the shoutout to Queen In-hyun’s Man in the acknowledgements, one of my all-time favorite shows.)

Hana is an up-and-coming actress in her first ever lead role, and as such she’s under a lot of pressure. That’s compounded by the fact that her parents gave up a lot to move back to South Korea from the U.S. in order to support her career, and Hana is keenly aware of the fact she isn’t nearly as established in the entertainment industry as others are, so she has much more to lose. Hana is easy to root for as she juggles her work, her fake personal life, and her real personal life.

After a lukewarm response to the premiere of her show, the production company asks Hana and her co-star, Bryan, to fake date in order to boost the ratings. Bryan is a member of the incredibly popular boy band NOVA, and Hana immediately realizes that sure, this could help the show—but it could also seriously backfire on her, depending on how Bryan’s many fans react to the news. (Small spoiler: There’s a reason online harassment is in the content warnings.) Their fake relationship also makes work complicated as Hana and Bryan aren’t always on the same page about how fake their relationship is, and that affects their performance in believable ways. There were some great character moments between these two as they got to know each other, and I really enjoyed where their relationship wound up at the end of the book.

Minjee takes longer to appear “on screen” (both within the book and within the show), but when she does, her and Hana’s relationship really starts to shine. The times they hung out together were great contrasts to the fake dates with Bryan, and it was immediately obvious (in a good way!) that Hana and Minjee were falling for each other. I really enjoyed how their friends-to-lovers relationship played out, though I do want to note that their relationship isn’t all smooth sailing—in different and more career-affecting ways than Hana’s fake relationship with Bryan.

Recommendation: Get it soon if you’re looking for a quick, entertaining romance to read. FLIP THE SCRIPT is filled with a lot of fun tropes that K-drama fans are sure to pick up on and enjoy. Hana is a great narrator, watching her fake and real relationships take their course is a great way to spend a summer day.

Tales of the Realm: Pride Month 2022— Interview with Lyla Lee; Author of Flip the Script