We have six books on our calendar for this week! Which ones are on your TBR list? 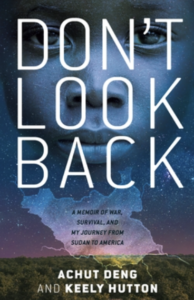 Don’t Look Back: A Memoir of War, Survival, and My Journey from Sudan to America by Achut Deng and Keely Hutton
Farrar, Straus and Giroux (Byr)

After a deadly attack in South Sudan left six-year-old Achut Deng without a family, she lived in refugee camps for ten years, until a refugee relocation program gave her the opportunity to move to the United States. When asked why she should be given a chance to leave the camp, Achut simply told the interviewer: I want life.

But the chance at starting a new life in a new country came with a different set of challenges. Some of them equally deadly. Taught by the strong women in her life not to look back, Achut kept moving forward, overcoming one obstacle after another, facing each day with hope and faith in her future. Yet, just as Achut began to think of the US as her home, a tie to her old life resurfaced, and for the first time, she had no choice but to remember her past. — Cover image and summary via Goodreads 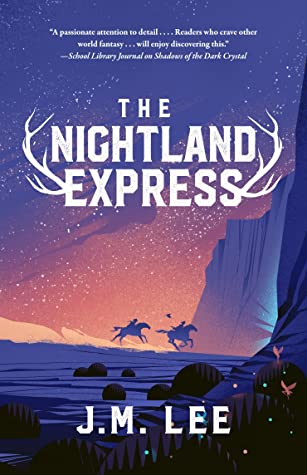 Young, poor, and orphaned in rural Missouri, Jessamine Murphy frets over her very pregnant sister, not at all sure how to feed their family until the baby is born, let alone after. When Jessamine comes across a recruitment poster reading “Pony Express Special Assignment: St. Joseph, Missouri to California. Two riders wanted. Orphans preferred,” her tomboy heart skips a beat: not only for the ample risk wage, but for the adventure and the chance to track down their wayward father in California. Jessamine cuts her hair, dons a pair of pants, and steps into the world as Jesse.

At the Pony Express station, Jesse meets Ben Foley, a quiet but determined boy, so secretive about his origin story there is little doubt it must be turbulent, and they become partners. They are an odd pair—one excitedly navigating the world as a boy for the first time, the other a mixed-race young man trying to defend his freedom—yet their esteem for each other grows as they head west across the United States.

As they encounter mysterious portals that carry them miles in an eyeblink and unusual creatures with uncanny glowing eyes, it becomes clear that this is no normal mission. A second, magical realm exists just below the surface of the mortal one, intertwined since the beginning of time—but the divisive violence of colonization and war are tearing the two worlds apart.

As Ben and Jesse struggle to find themselves, they discover their unlikely alliance may be the only thing that will save them . . . and the creatures and environment of two struggling worlds. 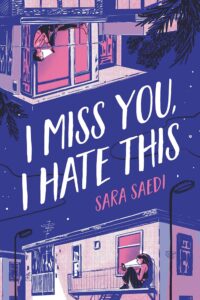 I Miss You, I Hate This by Sara Saedi
Little, Brown/Poppy

The lives of high school seniors Parisa Naficy and Gabriela Gonzales couldn’t be more different. Parisa, an earnest and privileged Iranian American, struggles to live up to her own impossible standards. Gabriela, a cynical Mexican American, has all the confidence Parisa lacks but none of the financial stability. She can’t help but envy Parisa’s posh lifestyle whenever she hears her two moms argue about money. Despite their differences, as soon as they met on the first day of freshman year, they had an “us versus the world” mentality. Whatever the future had in store for them—the pressure to get good grades, the litany of family dramas, and the heartbreak of unrequited love—they faced it together. Until a global pandemic forces everyone into lockdown. Suddenly senior year doesn’t look anything like they hoped it would. And as the whole world is tested during this time of crisis, their friendship will be, too.

With equal parts humor and heart, Parisa’s and Gabriela’s stories unfold in a mix of prose, text messages, and emails as they discover new dreams, face insecurities, and confront their greatest fears. — Cover image and summary via Goodreads 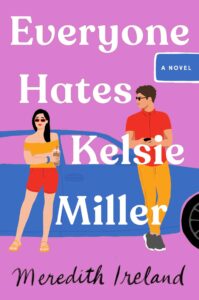 There’s no one Kelsie Miller hates more than Eric Mulvaney Ortiz—the homecoming king, captain of the football team, and academic archrival in her hyper-competitive prep school. But after Kelsie’s best friend, Briana, moves across the country and stops speaking to her, she’ll do anything, even talk to Eric, to find out why.

After they run into each other—literally—at the last high school party of the summer, Eric admits he’s been ghosted by his girlfriend, Jessica. Kelsie tells him she’s had zero contact from Briana since she left their upstate New York town.

Suddenly, a plan is formed: they’ll go on a road trip to the University of Pennsylvania the following week when both Briana and Jessica will be on campus. Together, they’ll do whatever it takes to win back their exes.

What could go wrong?

Used to succeeding in everything, Kelsie and Eric assume they’ll naturally figure out the details on the drive down. What they don’t expect is that the person they actually need may be the one sitting next to them. — Cover image and summary via Goodreads 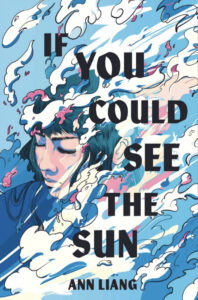 If You Could See the Sun by Ann Liang
Inkyard

In this genre-bending YA debut, a Chinese American girl monetizes her strange new invisibility powers by discovering and selling her wealthy classmates’ most scandalous secrets.

Alice Sun has always felt invisible at her elite Beijing international boarding school, where she’s the only scholarship student among China’s most rich and influential teens. But then she starts uncontrollably turning invisible—actually invisible.

When her parents drop the news that they can no longer afford her tuition, even with the scholarship, Alice hatches a plan to monetize her strange new power—she’ll discover the scandalous secrets her classmates want to know, for a price.

But as the tasks escalate from petty scandals to actual crimes, Alice must decide if it’s worth losing her conscience—or even her life. — Cover image and summary via Goodreads 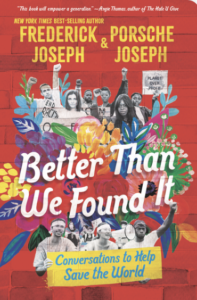 Better Than We Found It: Conversations to Help Save the World by Frederick Joseph & Porsche Joseph
Candlewick Press

Every generation inherits the problems created by the ones before them, but no generation will inherit as many problems—as many crises—as the current generation of young people. From the devastations of climate change to the horrors of gun violence, from rampant transphobia to the widening wealth gap, from the lack of health care to the lack of housing, the challenges facing the next generation can feel insurmountable. But change, even revolution, is possible; you just have to know where to start. In Better Than We Found It, best-selling author Frederick Joseph and debut author Porsche Joseph make the case for addressing some of the biggest issues of our day. Featuring more than two dozen interviews with prominent activists, authors, actors, and politicians, this is the essential resource for those who want to make the world better than we found it.