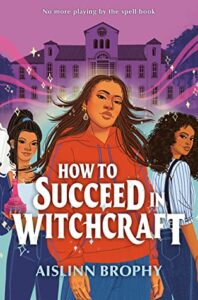 Summary: Shay Johnson has all the makings of a successful witch. Now that she’s a junior at T.K. Anderson Magical Magnet School, she’s one step closer to winning the full-ride Brockton Scholarship–her ticket into the university of her dreams. Her main competition? Ana freaking Alvarez. The key to victory? Impressing Mr. B, drama teacher and head of the scholarship committee.

When Mr. B persuades Shay to star in this year’s aggressively inclusive, racially diverse musical—at their not-quite-diverse school–she agrees, wearily, even though she’ll have to put up with Ana playing the other lead. But with rehearsals underway, Shay realizes Ana is…not the despicable witch she’d thought. Perhaps she could even be a friend–or more. And Shay could use someone in her corner once she finds herself on the receiving end of Mr. B’s unpleasant and unwanted attention. When Shay learns she’s not the first witch to experience his inappropriate behavior, she must decide if she’ll come forward. But how can she speak out when the scholarship–and her future–are on the line?

An unforgettable debut, How to Succeed in Witchcraft conjures up searing social commentary, delightfully awkward high school theater, and magical proclamations of love.

There is a lot going on in Aislinn Brophy’s HOW TO SUCCEED IN WITCHCRAFT, and the thing that delighted me most was the academic rivals turned romantic plot. Shay spends a lot of time—obsessed with Ana and how she compares to Ana, and watching Shay slowly start to come to terms with the fact that maybe the rivalry has been mostly one-sided this whole time and that Ana is really pretty is as hilarious and wonderful as only a teenage sapphic romance can be. If you’re a fan of the enemies to lovers trope, I think you’ll get a kick out of this book.

The world building in WITCHCRAFT is interesting, and I’m still not quite sure what to make of it. I love meta framing devices, so the snippets at the start of each chapter that gave more depth to the world in general and the school specifically were great. But ultimately, the WITCHCRAFT world ended up being really close to the real world, despite all of the magic. Magic’s foremost reason for existing in the book was to set up a system that would put even more pressure on the college application process, and I expected the magic to feature in bigger and more wondrous ways than it did.

On the other hand, that may be the point. Even in a world of magic, almost all Mr. B needs to manipulate Shay is a position of authority, a popular personality, and a connection to money, all of which is entirely mundane. I won’t lie—there are stretches of WITCHCRAFT that are downright horrifying when it comes to Mr. B. I felt wretched every time Shay recognized something was off and then talked herself out of it or second-guessed Mr. B’s intent. Brophy did a great job of illustrating how someone like Mr. B could manipulate his targets all while keeping up his façade, and Brophy explicitly kept the blame squarely on Mr. B for his behavior. Part of me wishes that there was a longer and more elaborate plan to take Mr. B down in the end, but that’s my bloodthirstiness talking.

Recommendation: Get it soon if you’re a fan of the enemies to lovers trope! Author Aislinn Brophy put together a fun sapphic, magical academic rivals plot that is interspersed with a more down-to-earth but nonetheless horrifying plot of a teacher looking to cross boundaries. HOW TO SUCCEED AT WITCHCRAFT if a strong debut, and I’m looking forward to what Brophy has in store for us next.

Black History Month – An Interview with Aislinn Brophy, Author of How to Succeed in Witchcraft; On Crafting a Magical Alternate Reality, Theater, and Their Queer Enemies-to-Lovers Witches

HOW TO SUCCEED IN WITCHCRAFT Author on Her Sapphic Supernatural Romance