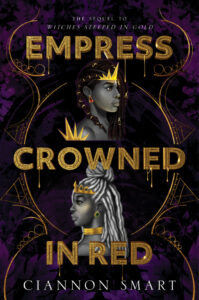 Iraya, her revenge taken and magic unfettered, turns her sights on a bigger goal: freeing Aiyca for the Obeah. But first she must shed the guise of the rogue warrior and become the Lost Empress her people need.

Jazmyne has crowned herself the doyenne and is prepared to go to extreme lengths—and court ruthless danger—to prove to her people she deserves the throne.

But there is more at stake than Jazmyne or Iraya know: a new threat is awakening on the other side of the island that could destroy everything they’ve been fighting for.

Trust is scarce, and betrayal a breath away. But Iraya and Jazmine once again find themselves turning to each other—after all, better the witch you know than the nightmare you don’t.