History is All You Left Me 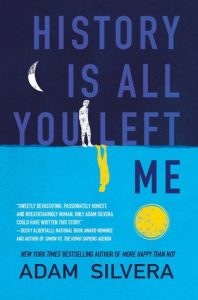 History is All You Left Me by Adam Silvera
Soho Teen