Lord of the Fly Fest 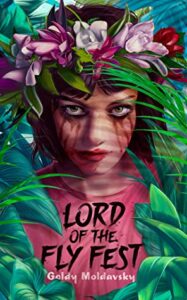 Lord of the Fly Fest by Goldy Moldavsky
Henry Holt and Co. (BYR)

One of Us Is Lying meets Lord of the Flies meets Fyre Fest in this wickedly addictive and funny YA thriller.

Rafi Francisco needs something really special to put her true crime podcast on the map. She sets her sights on River Stone, the hearthrob musician who rose to stardom after the mysterious disappearance of his girlfriend. Rafi lands herself a ticket to the exclusive Fly Fest, where River will be the headliner.

But when Rafi arrives on the Caribbean island location of Fly Fest with hundreds of other influencers and (very minor) celebrities, they quickly discover that the dream trip is more of a nightmare. And it’s not just confronting beauty gurus-gone-wild and spotty WiFi. Soon, Rafi goes from fighting for an interview to fighting for her life. And, as she gets closer to River, she discovers that he might be hiding even darker secrets than she suspected . . . — Cover image and summary via Goodreads