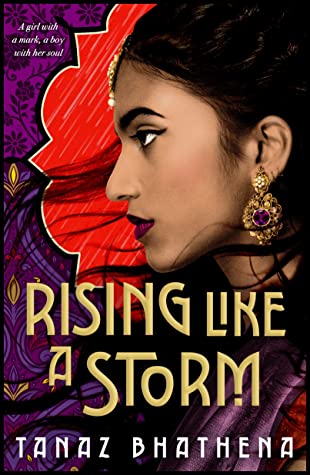 Rising Like a Storm (The Wrath of Ambar, #2) by Tanaz Bhathena
Farrar, Straus and Giroux (BYR)

With King Lohar dead and a usurper queen in power, Gul and Cavas face a new tyrannical government that is bent on killing them both. Their roles in King Lohar’s death have not gone unnoticed, and the new queen is out for blood. What she doesn’t know is that Gul and Cavas have a connection that runs deeper than romance, and together, they just might have the strength and magic to end her for good.

Then a grave mistake ends with Cavas taken prisoner by the government. Gul must train an army of warriors alone. With alliances shifting and the thirst for vengeance growing, the fate of Ambar seems ever more uncertain. It will take every ounce of strength, love, and sacrifice for Gul and Cavas to reach their final goal―and build a more just world than they’ve ever known. — Cover image and summary via Goodreads