The Genesis Wars (The Infinity Courts #2) 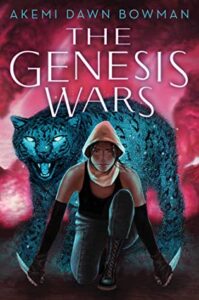 It’s been ten months since Nami narrowly escaped the Four Courts and Ophelia’s wrath. Ten months since she was betrayed by someone she once considered a friend. Someone she poured her heart out to. And now her family here in the afterlife are gone, captured, and Nami is utterly alone.

On the run, only steps ahead of the AI forces pursuing her, and desperate to free her friends, Nami must take the allies she can find, even if she doesn’t fully trust them. And as she tests the limits of her own power, she must also reckon with the responsibility that entails.

Stakes are high as Nami navigates old enemies, unexpected allies, and an ever-changing landscape filled with dangers and twists at every turn. Along the way, she’ll learn powerful truths about who she can trust and the sacrifices that must be made in order to fight for a better, freer world for all. — Cover image and summary via Goodreads