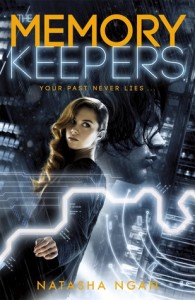 “No one can take your memories from you… can they?”

Seven is a thief with a difference – he steals downloadable memories from banks and memoriums to sell onto London’s black market, trading secrets and hidden pasts for a chance at a future of his own. He makes sure he keeps some special stuff back to ‘surf’ himself though – it’s the only real form of entertainment he can afford. But one night, as Seven is breaking into a private memorium in a wealthy part of London, he is caught in the act by one of its residents; Alba, the teenage daughter of London’s most famous criminal prosecutor. Instead of giving him away, Alba promises to keep Seven’s secret – as long as he allows her to go memory-surfing herself. In doing so, they discover a hidden memory about Seven’s past, revealing a shocking secret about Seven’s childhood, the government and a mysterious experiment known as The Memory Keepers…

Now Seven and Alba will have to race against time to unlock the maze of The Memory Keepers – but can they keep themselves out of harm’s way before the London Guard – and Alba’s father – catches up with them?