The Other Side of Free 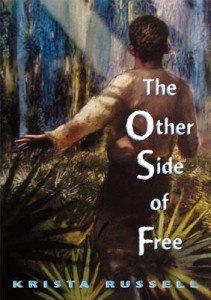 The Other Side of Free by Krista Russell
Peachtree Publishers

Summary: It is 1739. Young Jem has been rescued from slavery and finds himself at Fort Mose, a settlement in Florida run by the Spanish. He is in the custody of an ornery and damaged woman named Phaedra, who dictates his every move. When Jem sets out to break free of her will, an adventure begins in which Jem saves a baby owl, a pair of runaway slaves, and, eventually, maybe all the residents of Fort Mose.

While Jem and the other characters are fictitious, the story is based on historical record. Fort Mose was the first legally sanctioned free African settlement in what is now the United States. In 1994 the site was designated a National Historic Landmark and listed on the National Register of Historic Places. In 2009, the National Park Service named Fort Mose a precursor site on the National Underground Railroad Network to Freedom. — Cover image and summary via Amazon