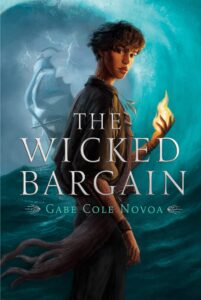 On Mar León-de la Rosa’s 16th birthday, el Diablo comes calling. Mar is a transmasculine nonbinary teen pirate hiding a magical ability to manipulate fire and ice. But their magic isn’t enough to reverse a wicked bargain made by their father and now el Diablo has come to collect his payment: the soul of Mar’s father and the entire crew of their ship.

When Mar is miraculously rescued by the sole remaining pirate crew in the Caribbean, el Diablo returns to give them a choice: give up your soul to save your father by the Harvest Moon or never see him again. The task is impossible–Mar refuses to make a bargain and there’s no way their magic is any match for el Diablo. Then, Mar finds the most unlikely allies: Bas, an infuriatingly arrogant and handsome pirate — and the captain’s son; and Dami, a genderfluid demonio whose motives are never quite clear. For the first time in their life, Mar may have the courage to use their magic. It could be their only redemption — or it could mean certain death. — Cover image and summary via Goodreads