What’s Coming to Me 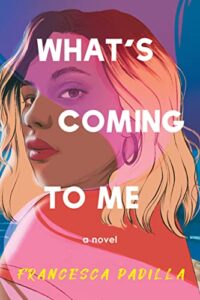 What’s Coming to Me by Francesca Padilla
Soho Teen

Seventeen-year-old Minerva Gutiérrez plans revenge on her predatory boss in this equally poignant and thrilling contemporary YA about grief, anger, and fighting for what you deserve, perfect for fans of Tiffany D. Jackson and Erika L. Sánchez.

In the seaside town of Nautilus, Minerva Gutiérrez absolutely hates her job at the local ice cream stand, where her sexist boss makes each day worse than the last. But she needs the money: kicked out of school and stranded by her mom’s most recent hospitalization, she dreams of escaping her dead-end hometown. When an armed robbery at the ice cream stand stirs up rumors about money hidden on the property, Min teams up with her neighbor CeCe, also desperate for cash, to find it. The bonus? Getting revenge on her boss in the process.

If Minerva can do things right for once—without dirty cops, suspicious co-workers, and an ill-timed work crush getting in her way—she might have a way out . . . as long as the painful truths she’s been running from don’t catch up to her first. — Cover image and summary via Goodreads