While You Were Dreaming 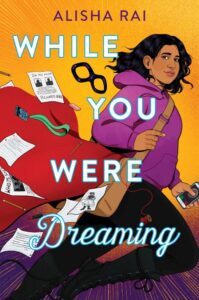 While You Were Dreaming by Alisha Rai
Quill Tree Books

If Sonia Patil had her way, she’d be attending her local comic con instead of covering a shift for her boss’s daughter. Since Sonia’s mom was deported and her sister, who never claimed deferred status under DACA, had to forgo college to support them, Sonia’s had her hands full with work, school, and pretending everything is okay at home.

Then Sonia, in homemade superhero cosplay, stumbles into saving her crush James’s life. When a video of the daring rescue goes viral, she—or, rather, a mysterious masked savior—is thrust into the spotlight. Now she’s hiding from TikTok detectives while trying to connect with James. And while she’s drawn to his friendly but oblivious nature, she can’t deny her escalating chemistry with another awkwardly charming boy.

Juggling crushes and a secret identity might just take superpowers. Will Sonia be able to hide in plain sight forever? — Cover image and summary via Goodreads