You Don’t Know Me but I Know You 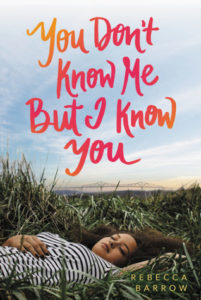 There’s a box in the back of Audrey’s closet that she rarely thinks about.

Inside is a letter, seventeen years old, from a mother she’s never met, handed to her by the woman she’s called Mom her whole life.

But when Audrey realizes that she’s pregnant, she feels something—a tightly sealed box in the closet corners of her heart—crack open, spilling her dormant fears and unanswered questions all over the life she loves.

Almost two decades ago, a girl in Audrey’s situation made a choice, one that started Audrey’s entire story. Now Audrey is paralyzed by her own what-ifs and terrified by the distance she feels growing between her and Rose. Down every possible path is a different unfamiliar version of her life, and as she weighs the options in her mind, she starts to wonder—what does it even mean to be Audrey Spencer?

Rebecca Barrow’s bright, honest debut novel about chance, choice, and unconditional love is a heartfelt testament to creating the future you truly want, one puzzle piece at a time.