A few years ago, my friend took me to Busboys and Poets in Washington D.C., In addition to serving as a restaurant/bar, Busboys and Poets has a section dedicated to books. All of their book selections are “an extension of our mission to promote cultural, political and historical awareness in our diverse communities.” Basically, they have an awesome book selection.

While Busboys and Poets only features a small YA section, it got me wondering what an entire store dedicated to diverse YA books might look like. Heck, forget an entire store, let’s just start with a shelf of diverse reads. In fact, I’m sure there are stores, libraries, home collections, that already do this sort of thing. Right? Please tell me I’m right… I mean, people are already organizing their libraries by color. 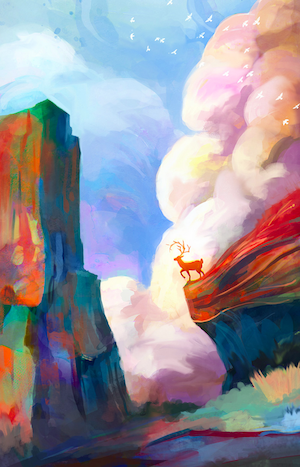 When I recently visited my local Barnes & Noble, inspired by K.Imani’s experiment, “Mad Words Turn to Positive Action,” I was pleasantly surprised with how many of the books on display were diverse ones that we’ve championed here. Of course, it could just be an alphabetical thing. I mean, Kagawa was next to Kang, while Lam, Lu, Mafi were close to each other in proximity. Maybe it was pure chance that these books were so prominently displayed.

My thinking was, why leave it up to chance? What if an entire bookshelf was simply dedicated to showcasing diverse reads? What would that look like? Unfortunately, I don’t think we’ll find out at Barnes & Noble any time soon. Which brings me to my next point: Does the general YA buying public care, or notice, diverse books? I’m gonna go ahead and say “no” for the sake of argument. How can we push it in their face then? Someone unaware of the struggle for more diverse books is just going to simply browse the shelves, looking for whatever catches their eye. Wouldn’t it be amazing then to have a shelf full of books featuring all diverse main characters — or titles by diverse authors?

I mean, it’s one thing to look around and see a smattering of non-white faces on covers but it’s another to be presented with row upon row of them. It’s a visual statement that can’t help but pique someone’s interest. It might make them stop and be like, “Wait, what section am I in?” And when they look up and see the big “DIVERSE READS” label, hopefully they’ll ask somebody. Or the answer will be so obviously right in front of them. Maybe they’ll go “meh” and walk on by, or maybe they’ll pooh-pooh the need for such a shelf, maybe they’ll complain! That would actually be the best, since then the bookseller could give them a mini-lecture about the importance of diversity, etc. Ha, just kidding. Not really.

Anyway, would the people in charge of putting books in places where books are put get behind something like this? I don’t know, but if publishers, librarians, book people, and readers all clamor for more diversity in their books, this seems like a small step that could be easily taken. Heck, it could be done in an hour. I’ll come help, I’m an excellent re-arranger.

Now, what I’m suggesting isn’t that diverse title should only be shelved here. But if book store promotions concurrent with Black History Month or Asian Pacific American Heritage Month come around annually, why not make a shelf of diverse reads a permanent thing? Does this tread dangerously close to “diversity” as label? Probably. But, at least for now, better some diversity than none. And isn’t “diversity” already a label marketing people are putting on things?

While it causes a little spark of joy to see a diverse book on the shelves, right now it’s a little like playing hide and seek. Wouldn’t it be cool to be overwhelmed by the selections instead? That’s how I felt walking into Busboy and Poets for the first time. “It’s all diverse books here, I can just grab one and go. Dones!”

Since we’re already headed into dream land, why not consider a shelf that incorporates affirmative action on our bookshelves. Yes, I’m talking quotas! I know, such a controversial word but hear me out. According to the 2010 census, the U.S. population is roughly 35.8% racial or ethnic minority. That breaks down to roughly 16.3% Hispanics or Latino, 12.2% Black or African American, 5.4% Asian or Pacific Islander American, and 1.9% two or more races. That leaves 64.2% white people. So taking those numbers, let’s slap together a one hundred title bookshelf that looks exactly like those percentages. What’s the point? I dunno, to see what it looks like? How would it compare to the current state of our bookshelves?

1. There’s a store in Massachusetts that specializes in multicultural books. In fact, it’s called Multi-Cultural Book World. Someone go and tell me how it is. It’s located, appropriately, on Martin Luther King Boulevard in Boston.

2. Why is there a “multicultural stories” tag in Amazon for children’s books but not for teen books? Can we get a tag Mr. Bezos? Also, what happened to the Multicultural Children’s Book Festival? Did it stop after the fifteenth one in 2010?

3. “We’ve also come very close to hiring several other non-white writers and have made a concerted effort to encourage submissions from a more diverse pool.” This is progress right? I mean, so very close!

4. Children’s Literature Association Conference presents Diverging Diversities: Plurality in Children’s & Young Adult Literature Then and Now. The first sentence kills me. “In 1965, Nancy Larrick wrote an article for the Saturday Review entitled ‘The All-White World of Children’s Books.’” This has been a thing since 1965? Geezes.

5. I’ve been reading Liz Lin’s blog series, “Coming to Terms with My Race.” She’s chronicling her experience through the five stages of Minority Identity Development (Atkinson, Morten, & Sue, 1993). Those are: conformity, dissonance, immersion, introspection, synergetic articulation and awareness. Also, there’s a link in her post about the stages of white racial identity development that I found veeeery interesting.