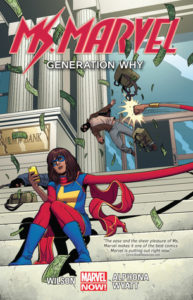 Summary (for volume 2): Who is the Inventor, and what does he want with the all-new Ms. Marvel and all her friends? Maybe Wolverine can help! Kamala may be fan-girling out when her favorite (okay maybe Top Five) super hero shows up, but that won’t stop her from protecting her hometown. Then, Kamala crosses paths with Inhumanity for the first time – by meeting the royal dog, Lockjaw! Every girl wants a puppy, but this one may be too much of a handful, even for a super hero with embiggening powers. But why is Lockjaw really with Kamala? As Ms. Marvel discovers more about her past, the Inventor continues to threaten her future. The fan-favorite, critically acclaimed, amazing new series continues as Kamala Khan proves why she’s the best (and most adorable) new super hero there is! 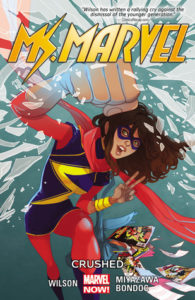 Review: I reviewed the first volume of Ms. Marvel about a year and a half ago, then got distracted and didn’t read the next three volumes even though I’d already bought them. I’m pleased to say that coming back to Kamala Khan’s world was just as fun as my first plunge into it.

Kamala’s story expanded nicely through these volumes. Her progression through obstacles (and villains) was peppered with a lot of cute, geeky moments. While there were a couple scenes were I think things got too preachy, I didn’t mind too much since I agreed with the messages. Kamala is a great example of a heroine who struggles to handle two different lives she is living but refuses to give up on either.

One of the ways that Ms. Marvel shines is that Kamala has so many important people in her life who she loves. Sure, her superhero moments are grand, but the character beats with her family, friends, and even idols are some of the best scenes. I was particularly fond of a scene with her mother in the fourth volume—you’ll know it when you see it—because I adore un-fridged mothers who love their daughters wholeheartedly. Other side characters got more development and screen time throughout these volumes, which helped give Kamala’s determination to protect her city more weight.

An unexpected downfalls of reading all three volumes back-to-back was that the change in art style between (and even within) volumes was glaring. The lack of a consistent illustrator was very distracting, and it tossed me out of the story every time the switch was made. Some of the artists were better at showing movement and action than others, and on occasion I had difficulty identifying minor characters because they looked so different from artist to artist. 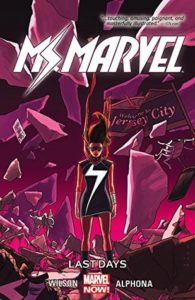 Recommendation: Get them (and the first volume) soon if you’re into comic books. These three volumes are great sequels to the first Ms. Marvel volume. Readers who loved the first volume will be sure to like these, and this series is a good starting point for comic book newbies. I’ve added the next two published volumes to my TBR pile, and I’m looking forward to reading more of Kamala Khan’s adventures.