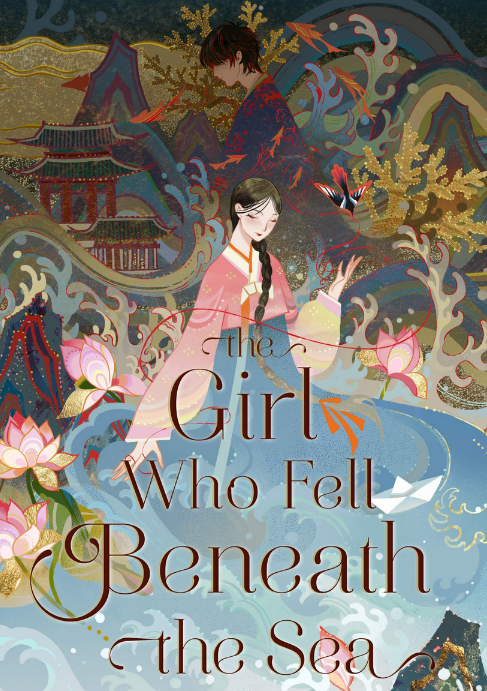 Title: The Girl Who Fell Beneath the Sea
Author: Axie Oh

Summary: Deadly storms have ravaged Mina’s homeland for generations. Floods sweep away entire villages, while bloody wars are waged over the few remaining resources. Her people believe the Sea God, once their protector, now curses them with death and despair. In an attempt to appease him, each year a beautiful maiden is thrown into the sea to serve as the Sea God’s bride, in the hopes that one day the “true bride” will be chosen and end the suffering.

My Thoughts: First, the cover art by Kuri Huang is simply gorgeous. There are flying fish, a bird near a red string connecting the two characters and above all, that skirt is amazing. Her hanbok becomes a swirling sea with a paper boat floating in the current. To learn a bit more about the cover, you can hop over to Fierce Reads to see Axie Oh’s commentary about it.

The thing that kept me reading and re-reading was also how immersive the writing was. This beauty carries throughout the entire book. I felt that I was moving within a fabulously illustrated movie as Axie Oh’s words painted each scene. The tale has a theme of the importance of story and the author is quite the talented storyteller. There are layers of stories flowing in, out, and around each other sometimes causing waves and other times bringing peace.

The tale begins with a lot of excitement with a storm and the pace stays fairly intense for a while as Mina learns about this mythical world she’s navigating and the many dangers there. Through it all, the love and relationships she’s had within her family, inspire and guide her as she makes difficult choices over and over again.

Of course, there is also a romance along the way. The story also leans into ideas about trust. Is it foolish to put our trust in others as Mina’s eldest brother would say? Mina has to make a lot of decisions about who to trust as she meets the many people and other beings under the sea. The Red String of Fate ties her to someone, but does she have to trust that too?

Readers who delight in fairytales are going to love falling into the sea with Mina. That will be especially true for those familiar with the Korean tale that inspired the author, The Tale of Shim Cheong and other traditional elements like the Red String of Fate and the magpie. Axie Oh has put her own spin on the story and it was interesting to see how that played out.

Recommendation: This is perfect for fans of fantasy, fairytale retellings, romance, and adventure, oh and dragons. In my case, tissues were needed, but as one character explained, tears are fine once in a while. You’ll want to get it as soon as it’s available.