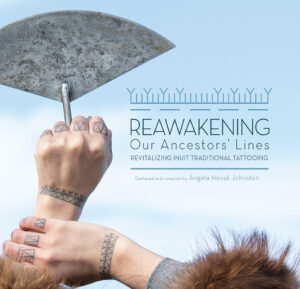 When I was in the library the other day, a book cover caught my eye. Somehow I had missed out on this book that was released in 2017. I’m sure I saw the list when it was honored by The American Indian Library Association back in 2020, but I never got my hands on Reawakening Our Ancestors’ Lines: Revitalizing Inuit Traditional Tattooing until this week. It’s a gorgeous book that features Inuit women who are reviving the traditional art of tattooing. The author, Angela Hovak Johnston, learned how to tattoo herself and others and the book shares that journey with others.

For thousands of years, Inuit women practiced the traditional art of tattooing. Created with bone needles and caribou sinew soaked in seal oil or soot, these tattoos were an important tradition for many women, symbols stitched in their skin that connected them to their families and communities.But with the rise of missionaries and residential schools in the North, the tradition of tattooing was almost lost. In 2005, when Angela Hovak Johnston heard that the last Inuk woman tattooed in the traditional way had died, she set out to tattoo herself and learn how to tattoo others. What was at first a personal quest became a project to bring the art of traditional tattooing back to Inuit women across Nunavut, starting in the community of Kugluktuk. Collected in this beautiful book are moving photos and stories from more than two dozen women who participated in Johnston’s project. Together, these women are reawakening their ancestors’ lines and sharing this knowledge with future generations. [publisher summary]

This book is just one of the many that have won or been honored over the years. In case you’ve missed any of the titles, here are a few other YA books that have made the American Indian Youth Literature Award lists:

Apple Skin to the Core by Eric Gansworth (Onandoga)

The term “Apple” is a slur in Native communities across the country. It’s for someone supposedly “red on the outside, white on the inside.” Eric Gansworth is telling his story in Apple (Skin to the Core). The story of his family, of Onondaga among Tuscaroras, of Native folks everywhere. From the horrible legacy of the government boarding schools, to a boy watching his siblings leave and return and leave again, to a young man fighting to be an artist who balances multiple worlds. Eric shatters that slur and reclaims it in verse and prose and imagery that truly lives up to the word heartbreaking.

As a biracial, unenrolled tribal member and the product of a scandal, Daunis Fontaine has never quite fit in—both in her hometown and on the nearby Ojibwe reservation. When her family is struck by tragedy, Daunis puts her dreams on hold to care for her fragile mother. The only bright spot is meeting Jamie, the charming new recruit on her brother’s hockey team.

After Daunis witnesses a shocking murder that thrusts her into a criminal investigation, she agrees to go undercover. But the deceptions—and deaths—keep piling up and soon the threat strikes too close to home. How far will she go to protect her community if it means tearing apart the only world she’s ever known?

The graphic novel Soldiers Unknown is a historically accurate World War One story told from the perspective of Native Yurok soldiers. The novel is based on extensive military research and on oral interviews of family members of Yurok WW1 veterans from throughout Humboldt and Del Norte counties. The author Chag Lowry is of Yurok, Maidu, and Achumawi ancestry, and the illustrator Rahsan Ekedal was raised in southern Humboldt. Soldiers Unknown takes place during the battle of the Meuse-Argonne in France in 1918, which is the largest battle in American Army history.

Marrow Thieves – Just when you think you have nothing left to lose, they come for your dreams.

Humanity has nearly destroyed its world through global warming, but now an even greater evil lurks. The Indigenous people of North America are being hunted and harvested for their bone marrow, which carries the key to recovering something the rest of the population has lost: the ability to dream. In this dark world, Frenchie and his companions struggle to survive as they make their way up north to the old lands. For now, survival means staying hidden – but what they don”t know is that one of them holds the secret to defeating the marrow thieves.

Hunting by Stars – Years ago, when plagues and natural disasters killed millions of people,much of the world stopped dreaming. Without dreams, people are haunted, sick, mad, unable to rebuild. The government soon finds that the Indigenous people of North America have retained their dreams, an ability rumored to be housed in the very marrow of their bones. Soon, residential schools pop up—or are re-opened—across the land to bring in the dreamers and harvest their dreams. Notable Native People: 50 Indigenous Leaders, Dreamers, and Changemakers from Past and Present by Adrienne Keene (Cherokee Nation) and illustrated by Ciara Sana (Chamoru)

Celebrate the lives, stories, and contributions of Indigenous artists, activists, scientists, athletes, and other changemakers in this beautifully illustrated collection. From luminaries of the past, like nineteenth-century sculptor Edmonia Lewis–the first Black and Native American female artist to achieve international fame–to contemporary figures like linguist jessie little doe baird, who revived the Wampanoag language, Notable Native People highlights the vital impact Indigenous dreamers and leaders have made on the world.

Elatsoe—Ellie for short—lives in an alternate contemporary America shaped by the ancestral magics and knowledge of its Indigenous and immigrant groups. She can raise the spirits of dead animals—most importantly, her ghost dog Kirby. When her beloved cousin dies, all signs point to a car crash, but his ghost tells her otherwise: He was murdered. Who killed him and how did he die? With the help of her family, her best friend Jay, and the memory great, great, great, great, great, great grandmother, Elatsoe, must track down the killer and unravel the mystery of this creepy town and it’s dark past. But will the nefarious townsfolk and a mysterious Doctor stop her before she gets started? A breathtaking debut novel featuring an asexual, Apache teen protagonist, Elatsoe combines mystery, horror, noir, ancestral knowledge, haunting illustrations, fantasy elements, and is one of the most-talked about debuts of the year. Tasha Spillett’s graphic novel debut, Surviving the City, is a story about womanhood, friendship, colonialism, and the anguish of a missing loved one. Miikwan and Dez are best friends. Miikwan is Anishinaabe; Dez is Inninew. Together, the teens navigate the challenges of growing up in an urban landscape – they’re so close, they even completed their Berry Fast together. However, when Dez’s grandmother becomes too sick, Dez is told she can’t stay with her anymore. With the threat of a group home looming, Dez can’t bring herself to go home and disappears. Miikwan is devastated, and the wound of her missing mother resurfaces. Will Dez’s community find her before it’s too late? Will Miikwan be able to cope if they don’t?

To learn about even more books that have received this award, be sure to check out the AILA page.