Looking for a contemporary mystery series with a multicultural cast? Look no further than the Langdon Prep series by Kimberly Reid! It all starts with My Own Worst Frenemy: 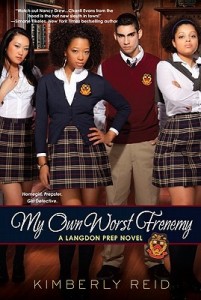 With barely a foot in the door, fifteen-year-old Chanti gets on the bad side of school queen bee Lissa and snobbish Headmistress Smythe. They’ve made it their mission to take Chanti down and she needs to find out why, especially when stuff begins disappearing around campus, making her the most wanted girl in school, and not in a good way. But the last straw comes when she and her Langdon crush, the seriously hot Marco Ruiz, are set up to take the heat for a series of home burglaries–and worse. . .

(Image and summary via Goodreads.)