It’s not easy writing about other, well, people. Cultural appropriation, offending someone’s sexual orientation, overlooking someone’s lack of privilege, it’s just land mines everywhere isn’t it? Even when you think you’re being sensitive, something comes along that tells you you’re wrong. Heck, it was just a few short years ago that I learned “Caucasian” was a dirty word. Sorry white people, I may have inadvertently insulted you. The good news is, from every mistake comes a learning moment.

When I read books about POCs, the first thing I do is check out the author. Are they a minority? Are they from the same ethnicity as the main character? Is there something in their bio that points to why they chose their protagonist to be non-white? Sometimes I think this might be a bad habit, as I tend to then read the book with a different perception heading in, colored by my pre-conceptions. Perhaps in an ideal world, I should read the book first, and then check out the author. But right now, I go into a book wanting to know who wrote it, and why they chose to include this person or that background.

What I’m basically looking for is this: what kind of authenticity is the author bringing to this book? If it’s a black author writing a black character, that makes me pay attention. If it’s someone non-Japanese writing a book set in modern day Japan, I perk up.

As most writers know, representing the other is not easy. This doesn’t even apply to just others. The authenticity question applies to every experience you might put down on paper. I had a friend in college who wrote an essay about kissing — creative writing requirements can be hilarious can’t they? — but it was clear from his words that he had never kissed a girl before. Needless to say, he lost the reader. Screwing up writing the other can do the same for your work. 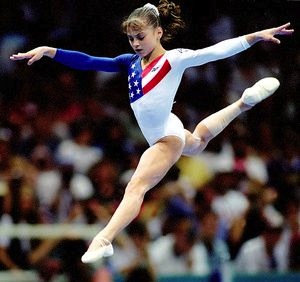 What I’d like to present here then, is a degrees of difficulty for authors writing the other. As arranged by gymnastic moves. Because, I mean, who isn’t/wasn’t into gymnatics? Dominique Moceanu forever! Gymnastics scoring is based on two things: degree of difficulty and execution. What I want to look at is how difficult it is to gain some authenticity, and strive to write a book that you can vehemently defend against critics’ claims that you “got it all wrong.”

I’m keeping my comments confined to racial diversity for the purposes of this post. But I believe the same scale could be used for all things other. The degree of difficulty score is just for the attempt, it has nothing to do with the execution. Hopefully, everyone can nail the landing. Because we are all superstars.

Note: Degree of difficulty score is rated for how hard it would be to get writing the other “right.”

Somersault
You’re not including any racial diversity in your book. Everyone is from the same background, there are no non-white people in 1800’s Europe, blah blah blah. That’s fine, it’s your book, do what you want.
Degree of Difficulty: 0.0

Cartwheel
You’ve decided to throw in a side character who is a minority. It’s super trendy so you think to yourself, “How can I jam in some diversity in here?” You decide to change a few physical characteristics, try your hand at capturing an accent, and sling on a last name that sounds different. Voila, diversity is fun!
Degree of Difficulty: 1.3

Splits
You are writing about your own ethnicity. If it’s not obvious you’re of that ethnicity — through author photos, last name checks, etc. — you may have to point that out during interviews. Or in your bio. The good news is you won’t have to answer any questions like, “What do you know about being Asian?” Your answer can always be, “I am Asian!” This “I am ____” card can be played at any time, but also understand that you’re now open to critiques about how you’re representing your people.

Sidenote: This last point can actually make your degree of difficulty skyrocket, depending on how interested you are in remaining in good standing with your community. This topic should actually be explored in another post. Writing the other while being that other, while keeping an eye on those others. Whew, what a mouthful. We’ll shelve it for next time…
Degree of Difficulty: 2.7

Handstand
“I was born there, raised there, etc.” Any close variation of this works out well. If you’re a native, even though you’re not of that ethnicity, your authenticity rating is going to be pretty high. Just make sure to include that tidbit in your bio, yeah?
Degree of Difficulty: 3.2

Round Off
Someone you know is of the Other. They are your (best) friend, your wife, your boyfriend, your mentor, your mailman. Whoever it is, you have drawn inspiration from them and have decided to immortalize them in ink. Bravo! A beautiful idea. However, beware the pitfall of singular models. That’s all I have to say here. Beware. Singular. Models. Nobody looks kindly on the “my black friend said…” defense.
Degree of Difficulty: 5.8 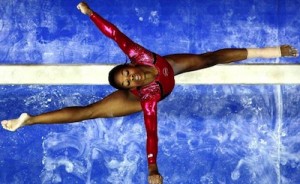 Walkover
A few years ago, you took a vacation to somewhere that you are writing about now. You brought along a shiny new Moleskin, took copious notes, engaged in witty banter with the people who served your meals (perhaps testing out your recently acquired Rosetta Stone skills), and even sat in the square people watching for an entire afternoon. You have visited the Other side and now feel confident you can write with authority.

You could even kick this up a notch. “I lived there for x-number of months.” That is a powerful statement. Very powerful. But even having lived somewhere for a few months doesn’t mean you know every/anything. I lived in England for six months but was nestled away in the countryside for most of it. I wouldn’t feel comfortable representing any location outside of Seven Oaks, much less write broadly about the British.

Your weekend jaunt to India should hopefully leave you feeling the same. Visiting places is all blind men and elephants, as far as I’m concerned. What about an immersion program, or having taught English in another country you ask? Same, same, same!
Degree of Difficulty: 6.4

All of this is very fine, and your efforts should be applauded. However, being an expert — and probably a bit of a know it all — on something does not necessarily mean you won’t be challenged about writing the Other. Your Asian Studies minor, the one you took four upper division classes in to graduate on time, is shiny but what do you really know?
Degree of Difficulty: 7.1

Backflip
You’re aiming to make a nuanced portrayal that will make reviewers exclaim, “How did this white guy write a transgendered black female so well?!” People hold their breath as you could possibly land on your head.
Degree of Difficulty: 8.7

Piked Arabian Double Front
You’ve done it, you’ve written a book that not only includes diversity but withstands critical analysis, is fetted with lots of awards, and not only makes you proud, but people will use it as a textbook for “How to write the Other.”
Degree of Difficulty: 9.9

As you can see, writing the other is not easy. Allow me to link to someone far more eloquent than I: s.e. smith’s blog post “Writing the Other.” It’s got less gymnastics comparisons but far more solid information and thoughts to chew on. Also, I’ve never done gymnastics in my life so this entire post could be suspect. You decide! 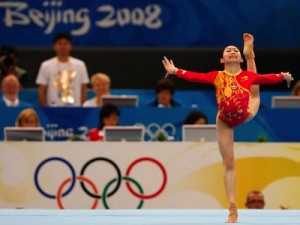 2 Replies to “Degrees of Difficulty: Writing the Other”