We welcome Lyn Miller-Lachmann today to share about her writing journey both as an insider and an outsider. Lyn is the author of Gringolandia, published in 2009, and Rogue published in May of this year. I was lucky enough to read Gringolandia earlier this week and am looking forward to sitting down with Rogue soon. 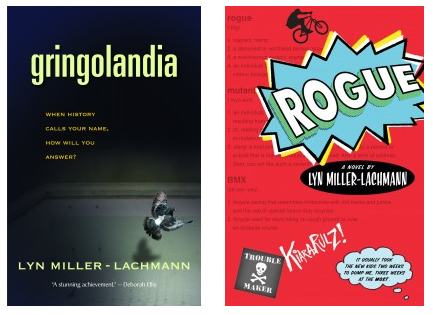 Before I became a published author of fiction for teens, I compiled multicultural bibliographies and edited the journal MultiCultural Review. Except for two years teaching high school social studies and English in Brooklyn, New York, and several more years teaching English as a Second Language in Madison, Wisconsin to refugees and students from Latin America, I had no special multicultural credentials to do this work—or so I thought at the time.

I left at the age of 18. It was a moment I had looked forward to for a long time, because my childhood community was a place where I had been misunderstood, bullied, and excluded. But moving brought its own challenges—meeting new people, learning new ways of doing things, and trying to find a place for myself where everyone already seemed to know the way. My own struggles helped me to understand my immigrant students in Brooklyn and Madison, and I learned a lot from their experiences of adjusting to a new land.

Some of the stories I heard from friends and colleagues became the basis for my YA novel Gringolandia, the story of a Chilean exile teenager trying to reconnect with his father, a former political prisoner and torture survivor. At the time, I questioned my right to write about a culture to which I did not belong. My Chilean friends encouraged me to go for it; they knew I’d done my research. The people I interviewed in Chile in 1990, during the transition to democracy, wanted me to tell people in my country of their suffering as a result of the CIA-sponsored military coup in 1973 that led to the 17-year dictatorship. The novel took me 22 years to write and get published. My fiction-writing career during that time was one of close calls, heartbreak, and misunderstandings. I also found out that, even though I had escaped the place where I didn’t fit in, I could not escape the problems that made it so difficult for me to fit in.

In 2008 I was diagnosed with Asperger’s syndrome, a high-functioning form of autism. The diagnosis answered a lot of questions about why I had so much trouble making and keeping friends, fitting in socially, understanding non-verbal communication and “hidden meanings”, and recognizing faces (because I’m not actually looking at people or making eye contact when I talk to them). With Gringolandia already in production, I questioned my ability to write fiction—which requires so much in terms of portraying emotion and social relationships, conveying the meaning of language and gesture, and forging connections with readers. These are all the things I struggle with in daily life.

I then remembered my Chilean friends’ advice. They said I’d done my homework. I had studied a culture that was not my own, thoroughly enough that I could write authentically about it. Perhaps that meant I could study all my characters’ cultures thoroughly enough to write about them. I could approach any culture as if it were a foreign culture—because to me as a person on the autism spectrum, every culture is a foreign culture. I also thought about the people I interviewed in Chile, survivors of a brutal dictatorship. They wanted their stories told so people would understand what they went through.

I had long avoided telling my own story of bullying and exclusion for a variety of reasons: I didn’t want to remember the pain. On some level, I felt I deserved it. I had internalized the dislike others felt for me and thus didn’t believe I could create a likable character similar to the younger me. But after my diagnosis, I realized that my story could help others in my situation, and create greater understanding of people on the autism spectrum, how we think, and the challenges that we face.

For inspiration, I turned to the X-Men. When I was a teenager, I was fascinated by the character of Professor Xavier, who used a wheelchair and gathered around him a group of misunderstood and rejected young people who nonetheless had special powers that they could use either to destroy society or to save society. He wanted these outsiders to use their powers for good, and by doing good, create understanding of mutants.

In this way Rogue was born. By setting the novel in the present, I was able to use the newer X-Men character of Rogue as protagonist Kiara’s hero. Rogue is the perfect role model for a teenage girl on the autism spectrum, as she cannot touch or be touched, and she has to steal the memories and emotions of others because her emotions did not fully develop.

Above all, I transferred to Kiara my strongest desire when I was growing up—to have a friend. Like Kiara, I would do anything for a friend—clueless things that got me laughed at (like thinking I could become popular by sitting at the popular girls’ table), naïve things that led other people to take advantage of me, and dangerous things to prove my loyalty. Rogue is the first novel I have written as an insider, and I have sought to present my character honestly and in a multidimensional way. Yes, she’s a young teen on the autism spectrum, but she’s also an avid bike rider who repairs her own bike, a lover of music, and a budding filmmaker. She has a life and interests that are independent of her neurological difference. She also has a lot in common with everyone else in her desire to be connected to other people, to be loved, and to contribute to her community. I’m not sure I’ll write a sequel or another novel with a protagonist on the autism spectrum—a lot depends on how many “friends” Kiara makes—but I am fortunate to have had the chance to write my own story and make something positive of it. 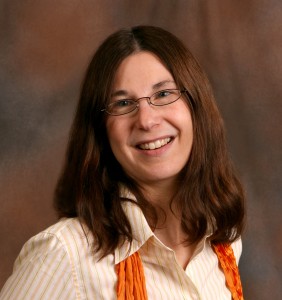 Lyn Miller-Lachman authored Gringolandia – published by Curbstone Press/Northwestern University Press and Rogue – published by Nancy Paulson Books/Penguin. She is also a reviewer for The Pirate Tree, a blog devoted to social justice and children’s literature.

9 Replies to “When Every Culture Is a Foreign Culture: Writing on the Autism Spectrum”