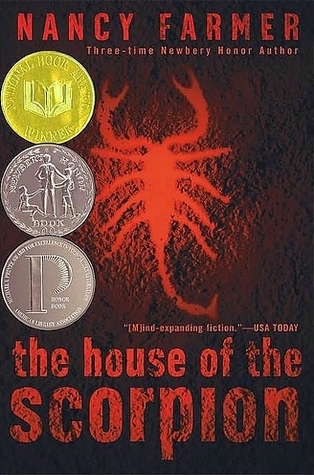 Summary: Matteo Alacrán was not born; He was harvested. His DNA came from El Patrón, lord of a country called Opium — a strip of poppy fields lying between the United States and what was once called Mexico. Matt’s first cell split and divided inside a petri dish. Then he was placed in the womb of a cow, where he continued the miraculous journey from embryo to fetus to baby. He is a boy now, but most consider him a monster — except for El Patrón. As Matt struggles to understand his existence, he is threatened by a sinister cast of characters, including El Patrón’s power-hungry family, and he is surrounded by a dangerous army of bodyguards. Escape is the only chance Matt has to survive. But escape from the Alacrán Estate is no guarantee of freedom, because Matt is marked by his difference in ways he doesn’t even suspect. [Image and summary via Goodreads]

The House of t 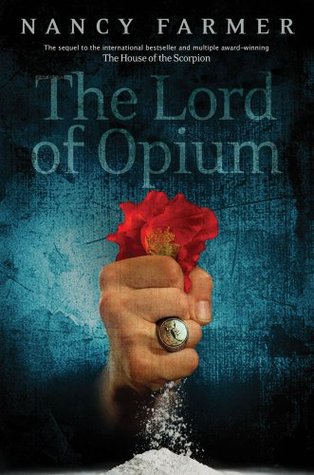 he Scorpion is one of those books from my childhood that I remember oh-so-fondly — it was terrifying and fascinating, and a great introduction to both the dystopian and science fiction genre. It had everything: Clones! Adventure! Political conflict! The worldbuilding was complex yet incredibly easy to fall into. The House of the Scorpion was my first Nancy Farmer book and it led me to read every other Nancy Farmer book I could get my hands on. Reading the book again as an adult did not diminish the experience. If anything, being older lets me truly appreciate the incredible storytelling and sense of adventure in the The House of the Scorpion.

When The Lord of Opium came out a month ago, I’d nearly forgotten about this childhood favorite. Now that the long-awaited sequel is out, I am ready to reread everything Nancy Farmer again.