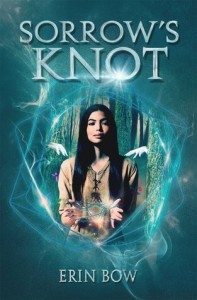 Summary: At the very edge of the world live the Shadowed People. And with them live the dead.

Willow’s power seems to be turning inside out. The ward is in danger of falling. And lurking in the shadows, hungry, is a White Hand – the most dangerous of the dead, whose very touch means madness, and worse. —(Summary and image from author’s site)

Review: I fell in love with this book from the second page, which is such a rare experience for me that I actually had to reread the opening scene to make sure of my feelings.

The world of Sorrow’s Knot is a fascinating and ahistorical creation that borrows from Native American, Celtic, and Japanese folklore. Erin Bow did a lot of research in order to build this world, and the effort shows in everything from the food to the houses to the descriptions of the drums and drumming. Perhaps what I love most is that Bow trusts the readers to learn from context anything that’s unfamiliar instead of assuming they won’t get it.

That allows Bow to focus on the actual prose, which is spectacular. There were times I wanted to stop and read the book aloud, just so I could hear the rhythm of the words. Stories and storytelling are of major importance in the book, and Bow wrote a book that sounds like old fairytales, if that makes any sense. (You can read an excerpt here.) This is a book where you can really luxuriate in the world and the atmosphere the author creates for you. The descriptions of the scaffolds and the dead (particularly the White Hand) are all the right sorts of eerie, and I appreciated how wide and full of unknowns the world felt.

Otter, Kestrel, and Cricket are a fantastic power trio who are all competent, intelligent, and courageous. Their banter—and Kestrel and Cricket’s romance—was adorable, and I had no trouble believing that these were friends who would break taboos or go to the end of the world for one another. The depth of their trust, love, and respect for each other made the first half of the book compelling despite the comparatively slow build of the plot. Most of the other important characters felt like people in their own right and not just accessories to the main trio.

In other books, I would probably complain about the relative lack of explicit rules for the magic, but the magic meshes well with the world and the storytelling style. While the solution to the story was a bit too simple for my tastes, I was ultimately satisfied by the characters’ trials, journeys, and sacrifices that made that solution possible.

Recommendation: Buy it now. Sorrow’s Knot was easily one of my favorite books this year. (With Christmas around the corner, there are people on my shopping list who may very well end up owning this book.) The world is rich, the characters are believable, and the prose is moving and mesmerizing. I’m definitely looking forward to future works by Erin Bow.