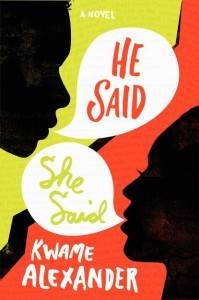 The stakes are high, the romance is hot, and when these worlds collide, behold the fireworks! — cover image and summary via Goodreads

Review: I have yet to read a “hip hop” novel because the genre doesn’t appeal to me, but I thought I’d check out “He Said, She Said” because I know of Kwame Alexander’s work with school kids and admire his Book-in-a-Day program. I know he is a talented poet and children’s author, so I was looking forward to reading his first young adult novel. Unfortunately, Alexander’s novel didn’t sway me into reading more “hip hop” novels.

When I teach creative writing with my students, I encourage them to “show, not tell” by adding dialogue to their short stories. Usually, in a creative work, the use of dialogue adds to the story, moves the plot forward, reveals character, etc. In Alexander’s novel, the overuse of a dialogue backfires and instead leads to more telling, rather than showing. Because Alexander relied heavily on dialogue to tell his story, I never got a sense of setting, of the physical world Omar and Claudia live in. For example, they protest that their school is run down, but there is not a single description of the school. In what way was the school run down? Were the walls filled with graffiti? Were all the toilets broken? Were there broken desks everywhere?  Dialogue in a story is helpful, but all the senses need to be engaged for a reader to really lose themselves in a story and Alexander does not make use of all the senses.

I’m big into writers creating well-rounded characters, flawed characters, characters that make us root for them. Again, unfortunately for Alexander, the male main character, Omar “T-Diddy” Smalls, is extremely unlikeable. The reader is supposed to not like him in the beginning so that we can see his growth, but the change truly comes a little to late. I think Alexander tried to have the reader like Omar earlier, but he would always ruin a moment of Omar’s growth by some gross sexist comment towards Claudia and “getting in her panties”. I understand teenage boys can be that foul, but even in his quiet moments, Omar’s thoughts were the same. It got really annoying after a while. I also felt that Claudia could have been written better instead of written as “the hard to get girl who eventually crumbles to the bad boy’s charm”.  It’s such a bad trope and not very true to life. At times it felt as if the feelings Claudia began to have for Omar came out from no where and not from a genuine place. In fact, both Omar and Claudia didn’t feel very genuine at all. They were one dimensional characters that were often there to occasionally shout platitudes towards fighting the man, and to create a very unconvincing love story.

He Said, She Said is a good premise – two unlikely people finding love while finding a purpose – but in execution, the story is lacking. I feel that Alexander could have relied less on the use of dialogue (literally pages at a time) and spent more time constructing the story. He Said She Said could have used a few more rounds of revision in order to make this a truly engrossing novel.