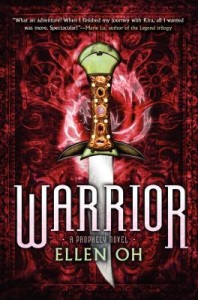 Summary: Kira, the yellow-eyed demon slayer who protected her kingdom in Prophecy, is back . . . and her dramatic quest is far from over. After finishing Ellen’s first novel, Prophecy, School Library Journal said they were “ready for a sequel.” Well, here it is Filled with ancient lore and fast-paced excitement, this page-turning series is perfect for fantasy and action fans.
Kira has valiantly protected her kingdom–and the crown prince–and is certain she will find the second treasure needed to fulfill the Dragon King’s prophecy. Warrior boasts a strong female hero, romantic intrigue, and mythical creatures such as a nine-tailed fox demon, a goblin army, and a hungry dragon with a snarky attitude. – cover and summary via Indiebound

Review: First Julie Kagawa ends The Eternity Cure with a cliffhanger and then Ellen Oh does the same thing with Warrior! Really, ladies?! Why must you be so cruel? Why must you break my heart so? I will say, based on the ending of Warrior, the third book will probably be amazing and I can’t wait to get it into my eagerly awaiting hands. But I’m getting ahead of myself.

Warrior picks up just days after Prophecy leaves off,  the events of the first book still very fresh in the hearts of Kira and her family. The book also deals with the political fallout of the events and Oh spends some time dealing with the issue of what would happen to a kingdom that has lost both its King & Queen and is now ruled by another. I greatly enjoyed this aspect, exploring the after effects of war both from a psychological and political perspective. The reprieve is short lived when the new King is assassinated, and Kira’s life and that of her cousin Taejo is put in jeopardy. In Prophecy, Kira was tasked to find the first of three magical objects signifying the fulfillment of the Dragon King prophecy and this new threat to Kira and Teajo’s lives is the catalyst for them to go in search for the jeweled dagger. Off their troupe travels, this time meeting new mythical helpers as well as fighting an even creepier demon army than before. Seriously, this demon army that the Demon Lord creates is effective and deadly. There were times when I seriously wondered who would get out alive in the battles and was praying for some of my favorite characters.

One of the treats of this novel, for me, is that Oh explores more of the world of the Seven Kingdoms. This time we head north, via an adventure at sea and then traveling through the snow to the mountains. I love watching Korean Dramas, and after watching so many, I have a visual picture in my mind of the landscapes that Oh describes so beautifully. I imagine the world that I’m familiar with layered with the fantastical elements Oh adds. The strength of the novel lies in Oh’s descriptions of her world and having us truly feel what the characters are feeling. The cold that Kira and her group experience as they travel towards the mountains, I could feel in my bones. Many times I curled up tighter in my blankets because I could clearly imagine the chill that Kira felt.

While I’m angry that Oh just ended the story on a cliffhanger, I know that the next novel will be a thrilling conclusion to the series and I can’t wait.