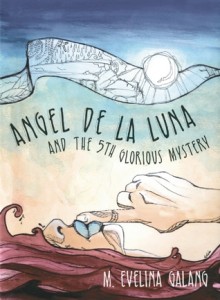 Summary: Angel has just lost her father, and her mother’s grief means she might as well be gone too. She’s got a sister and a grandmother to look out for, and a burgeoning consciousness of the unfairness in the world—in her family, her community, and her country.

Set against the backdrop of the 1986 Philippine People Power Revolution, the struggles of surviving Filipina “Comfort Women” of WWII in the early 1990s, and a cold winter’s season in the city of Chicago, is the story of a daughter coming of age, coming to forgiveness, and learning to move past the chaos of grief to survive. — cover image and summary via Goodreads

Review: Within just a few pages I suspected that this was a book that would challenge me and make me work – make me think. Prior to reading this book I had very little knowledge about the history of the Philippines and the novel covers a lot of historical territory. The bigger issue initially though was language. The majority of the text is in English, but Galang’s characters code switch between English and Tagalog and there are no italics to be found. Yes, the meaning was often clear through context, but it was challenging to read with that bit of uncertainty. Looking to the back of the book, I found that there was no glossary, but there was a rather thorough explanation for that choice “In Context (Or,  Why There is No Glossary).” I’ve read articles about authors using or not using italics and including or omitting glossaries and she makes a very strong case for writing in this style. The reader who doesn’t know Tagalog may choose to use the Internet and find the definitions or just fall into the story and go with the flow. I really wanted to know what all of the words meant, but a conversation between Angel and her father convinced me to skip the definitions. He was explaining about how to listen to the blues, “The trick, Angel, is not to think. Just feel it.”

There is plenty to feel in this story. Angel and her family are dealing with the unexpected loss of her father. In the aftermath, her mother pulls away from the family and adds one more loss. The book moves on to other issues though as Angel becomes increasingly involved with politics. She protests the corruption in the government in an effort to overturn the presidency. This section of the book was a little harder for me to follow. I wasn’t always certain what exactly was being protested and why, but even so, Galang’s story pulled me along. Angel, her sister Lila and her grandmother also visit elderly comfort women. These are women who were taken by Japanese soldiers during WWII and were used as sex slaves. The amazing strength of the women in this book and the stories of the comfort women blazed through any confusion I may have had on my first read through.

The beginning of the story centers on Angel’s immediate family and those closest to her. The second portion expands out into the larger community and the final section pulls back in again to a more intimate view of Angel’s inner conflicts. It’s in the final portion that the book felt the most like a young adult novel. In spite of the teen main character, it felt more like an adult novel in the beginning. I still can’t place my finger on why that was true for me, but maybe it was that there was so much that was unfamiliar in that part of the book. Also, when Angel was in the Philippines, she was attending a private Catholic school for girls and that was only part-time. Most of her time was taken up with work, family duties, and politics. She was dealing with adult situations as she stood in for her absent mother. The final section takes place in Chicago with her mother and around high school and her new friends. There was revolution in her political acts in the Philippines, but there almost seems to be more revolution here as she settles into her new situation in the U.S. and certainly in her interactions with her mother.

This is a story of self-discovery, family, hope and healing. There is a lot of pain and heartbreak within these pages, but there is also strength and beauty. Galang’s writing is lyrical and rich – something to savor.

Recommendation: Angel de la Luna and the 5th Glorious Mystery was on the 2014 Amelia Bloomer Project List and I am not surprised. This is a book not to be missed. Get it soon. It may require a little extra effort for a reader without the background knowledge or Tagalog language skills, but any effort is totally worth it. Angel and the women in her life will be with me for a long time to come.