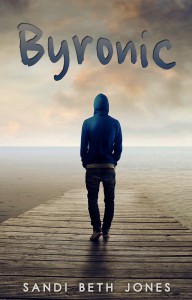 Summary: When the creatures in her dark drawings come to life, Chelsea finds that the mysterious Geoff is the only person she can confide in. But she can’t help wondering who she’s kissing: her tender confidant or the dangerous Byronic rebel bent on shocking his detached father.

Starting over in the South Carolina Lowcountry is just what sixteen-year-old Chelsea needs. Unfortunately, moving also means living with her mom’s snobbish British novelist employer and his moody son Geoffrey. Knowing that her new home likely used to be a slave holding plantation doesn’t make her feel any more at home.

Troubled and reckless after his brother’s mysterious death, Geoff often mimics his father’s literary favorite, Lord Byron, acting “mad, bad, and dangerous to know.” She’s determined to keep her distance and buries herself in her art, though the darkness of her drawings troubles her and others who see them. When people in the Gullah and Geechee community point out that she has been drawing Boo Hags and haints—powerful and terrifying creatures of local legend and superstition—she starts to wonder about her own heritage and her connection to the Sea Islands. She begins to question her own grasp on reality when it seems those creatures start making their way out of her drawings and into real life.

It’s clear that Geoff has some secrets of his own, but he might be the only person she can confide in. Chelsea must decide who she can trust, when nothing in the Lowcountry is what it seems.

Review: If you’re a fan of gothic-style novels—you know, the ones with big mansions, suspicious deaths, a love interest that might be just as sinister/evil as he is sexy, and lots of disturbing things everywhere—Byronic is the summer book for you, especially if you’re looking for more biracial heroines to add to your bookshelf. Sandi Beth Jones modernized some of my favorite gothic tropes, set them in South Carolina, and explored Gullah folklore, which I wasn’t familiar with at all.

Chelsea was a fun heroine, and Jones did a good job of establishing a distinct, memorable voice for her. In fact, one of the things I liked best were the little details Chelsea noticed—not surprising, considering her talent with art—like color and light and how things were framed. There were a lot of rich descriptions, and some of my favorite ones had to do with the supernatural goings on. Any scene involving the Boo Hags or haints had great sensory descriptions. Chelsea might not always know what was going on, but she was almost always a person of action, and I appreciated it.

Geoff was slower to win me over, and it wasn’t until he and Chelsea got on the same page that I started to root for him as a love interest. Until then, he was interesting because of the mystery surrounding his brother’s death/disappearance and extremely contentious relationship with his father. Once he and Chelsea were firmly established as a team, I thoroughly enjoyed his character. Their romance was generally filled with respect, trust, and the giddy (and not-so-giddy) parts of high school dating.

My chief complaint about the book was that I felt it took a little too long for the Boo Hag to become an integral part of the story. While I appreciate that the slow realization that Things Are Not All Right is an important aspect of gothic novels, I honestly wanted more horror and less high school. (Mr. Ramsey’s plotline also felt like it was introduced a little late, though it was a great way to make me hate him even more than I already did.) I wish Jones had spent more time exploring Chelsea’s powers and the haints in particular, but I suppose that’s what sequels are meant for. Nevertheless, whenever the supernatural came into play, it took center stage.

One thing to note: I felt a little uncomfortable, at times, with how Chelsea talked about her father’s schizophrenia, Geoff being on medication, or her worries about the troublesome things she started seeing. I am not educated enough on these topics to do anything other than point out my unease.

Recommendation: Get it soon, if gothic YA books are your thing. It’s a fun ride, and while the pacing wasn’t always to my liking, the memorable characters, setting, and supernatural elements made up for it. The romance was a slower build, but Chelsea and Geoff were a great pair. I’m looking forward to further books in the series!