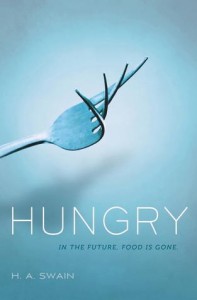 Summary: In the future, food is no longer necessary—until Thalia begins to feel something unfamiliar and uncomfortable. She’s hungry.

In Thalia’s world, there is no need for food—everyone takes medication (or “inocs”) to ward off hunger. It should mean there is no more famine, no more obesity, no more food-related illnesses, and no more war. At least that’s what her parents, who work for the company that developed the inocs, say. But when Thalia meets a boy who is part of an underground movement to bring food back, she realizes that most people live a life much different from hers. Worse, Thalia is starting to feel hunger, and so is he—the inocs aren’t working. Together they set out to find the only thing that will quell their hunger: real food.

Review: I admit that the premise of Hungry sounds both interesting and a bit far-fetched at the same time. The concept of having meal replacements is not a new concept in science fiction, but it is one that if the science isn’t done right can be very unbelievable. In her novel, Swain almost makes it work. She provides the science of how it works; society takes a substance called Synthamil that is calibrated for every person’s specific nutritional needs. The reason for the Synthamil is that there was a war over food, hence food shortages, and Synthamil was the answer. Therefore, one can assume that in Thalia’s world there has been a population explosion which immediately made me wonder “what about the poor folk?” And this is where Swain’s premise gets deep and the book becomes less about the fact that people don’t eat food but the social inequalities that exist because of it. At it’s core, Hungry is a study of the “Have” and the “Have Nots” as Thalia learns that the privilege life she has lived comes at a cost. By becoming involved with Basil (one of my critiques was the food names for people) Thalia is able to see how the other-half lived and really see how controlled her society has become.

While I enjoyed the novel and felt that it moved at a good pace, I was thrown out at times because I questioned a bit of the world building. I wondered how far into the future the novel took place because based on small clues given, it seems like Thalia could be my future granddaughter’s generation. If that is the case, some of the science Swain includes, such as Thalia’s genetic mutation for hunger, doesn’t work. In fact, Thalia’s mother is the inventor of Synthamil therefore making the product a fairly recent change. Because of that, I couldn’t believe that a society could completely change from one dependent on food (and the controls that went with it) to one without. I feel with Synthamil being so recent in Thalia’s world, that more people would be resistant and still feel hunger. I feel that Swain’s premise was an interesting one and attempted to ask questions about fairness and privilege, but her science just didn’t fully work. And when one is writing a science fiction/dystopian novel, one’s science really needs to work.

One Reply to “Mini-Review: Hungry”