As part of my graduation requirements for my MFA, I had to write a critical paper about an issue within the literary world. I chose Diversity in Young Adult Literature, which is actually how I ended up writing for Rich In Color. As a result of the paper, I started to contribute to the conversation about the need for more diversity. I’ve decided to share excerpts of my paper over the next few months.

Why Diversity?
If today’s adolescents are more sophisticated, more savvy, more globally conscious, why does their literature not reflect this trend? In 2011 on her blog, YA author Kate Hart took the time to evaluate the book covers of 900+ YA books, both traditional and self-published. Sadly, 90% of the books had a white character, 10% the character’s ethnicity was ambiguous, 1.4% reflected a Latino or Asian character and 1.2% feature a black character.

Here is why this is a problem. The covers reflect only one standard of beauty – the Eurocentric standard. The focus on the “pretty white girl” reinforces the notion that white beauty is the default and that people of color are the other, therefore of no inherent value. This concept is not new as YA author Ellen Oh points out in her blog article “Why The Pretty White Girl YA Book Cover Trend Needs to End”. She states, “Putting pretty white girls on all your book covers is the book equivalent of what all our fashion magazines do. An idealization of beauty that is unrealistic and dangerous to our youth.” The harm from such images has been well-documented in various studies throughout the years.

The 1939 Kenneth and Mamie Clark doll experiment is a prime example of how images reflected in the media can harm to a person of color. In the experiment, Black children were given a white doll and a black doll and were asked such questions as “Which one is prettier?” Overwhelmingly, the children would choose the white doll. In 1996, as part of my undergraduate thesis, I attempted to prove that while diversity in the media had improved, many Black children still had lower self-esteem. My thesis partner and I chose three different dolls, a white doll, a light-skinned doll whose ethnicity was unclear, and a dark-skinned doll. We asked the same questions as the Kenneth and Mamie Clark study and most of the time the girls chose the light-skinned doll. We were surprised by the result, expecting the girls to choose the white doll; however all of the girls we interviewed were children of our university’s alumni and were teaching their children Afro-centric values. While we ultimately did not prove that media was having a negative effect on the self-esteem of Black girls, we understood the importance that parents have on guiding their child’s emotional development. Many children of color, however, do not have this type of support and rely on media to help them shape their self-concept.

Novels not only tell stories; they can change the reader’s thoughts and perceptions about themselves and their world. To a young adult, finding a reflection of themselves in a novel is crucial to aid in their emotional, social, and mental development. If the majority of YA book covers display pretty white girls, then the majority of adolescent readers of color are not reading books that reflect them. They are not having their developmental needs met.

Young children, specifically teens, look to media and literature to gain an understanding of their world. For children of color, seeing a world where your color is not represented, or even not valued, can be disheartening. When a teen reads book after book after book with white main characters, then can easily begin to believe that they are worthless. In an article about YA diversity, author Walter Dean Myers described his reading experience growing up reading mostly British novels. “What happened as a result, in retrospect, was that I devalued my own experiences. I decided at about 14 I would stop being Negro—that was the phrase then. Books transmit values, and if you don’t find your life in books, bingo, you have to reach the conclusion that you are less valuable.” Myers grew up during the 50’s when there truly wasn’t a number of books with diverse characters. Even when I was a teen in the late 80’s, the landscape of diverse novels had improved, but it was still quite sparse. The majority of novels featuring a PoC were usually historical novels about a Black child or family overcoming an obstacle. While I did learn much through the novels, the characters were not relatable. I grew up in middle class suburbia where I was often one of two Black students (and the other Black student was my sister!) Luckily, I had parents who constantly reminded me that my skin was beautiful; therefore I did not feel that I was worthless because I was not represented in the books I read.

Many children and teens, however, do not have this constant reinforcement and look to media and novels for their identity. What happens as a result is self-hatred, which can be shown through the popularity of skin whitening products. Many Black girls are ashamed of their hair because it is curly instead of straight. Black women spend $1.2 billion each year on beauty products. I wonder, how much of that money is spent trying to meet a Eurocentric concept of beauty. How would that number change if Black girls were able to see positive reflections of themselves in the media, literature included? How would that number change if more White girls were exposed to other standards of beauty besides their own? How would these girls, who are empowered with strong sense of selves through positive images, change their world? 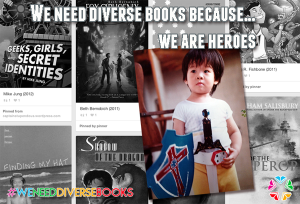 Young Adult literature gives teenagers not only a chance for self-reflection, but also the ability to think about their future. If teenagers of all races are able to read diverse texts, they will not only understand the other, but be able to empathize and relate to each other. Young Adult literature has the power to change our society; unfortunately it is currently failing in this endeavor.

3 Replies to “Why Diversity?”