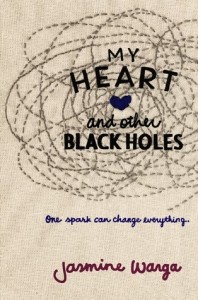 Summary: Sixteen-year-old physics nerd Aysel is obsessed with plotting her own death. With a mother who can barely look at her without wincing, classmates who whisper behind her back, and a father whose violent crime rocked her small town, Aysel is ready to turn her potential energy into nothingness.

Review: It is interesting that two of last week’s new releases dealt with the subject of suicide, as it is a subject that is sensitive to many and one that a lot of people don’t want to talk about, which is a shame because many folks experience depression and/or have thoughts of suicide. Teens especially need to be able to have someone to reach out for help, and sometimes, handing a young adult book that speaks to the heart of what they are going through can save a life. I honestly feel that My Heart & Other Black Holes could be a potential life saver for many young adults.

While Aysel’s depression is triggered over her father’s crime, Warga makes note to show how Aysel showed signs when she was growing up, so the novel doesn’t feel like one of those, “she’s depressed over something and now she’s all better, happy every after” novels. No, when we meet Aysel she is in the thick of her depression, has made the decision to commit suicide and is actively seeking help by having a suicide partner. And this is where I think Warga’s novel really shines. Reading the thought process of someone committed to taking their own life is very tough, but it is a thought process that is very real, hence making Aysel a fully-fleshed out character. It makes the reader empathize with Aysel, as we understand that when someone is at the point Aysel is, when they are in their darkest moments, it can be extremely hard to change their thinking. A person who is depressed to the point of committing suicide will not “just get over it”.  Aysel is actively looking forward to her death. As a teacher of teenagers, this was hard to read because I kept thinking about a student who came close to this point a few years ago, but reached out and got the help she needed. As the novel is told in first person, Aysel, unfortunately does not believe that she can find help or even capable of help. It was also those moments that the heart of Warga’s story really impacted me.

It was also Aysel’s thoughts, her self-awareness about her depression that really made her a character to root for. She even personifies her depression, calling it a black slug, and it became a “villain” in a way. She has to actively fight against the black slug and sometimes she wins, sometimes she looses. I feel that having Aysel name her depression was a stroke of genius by Warga. It turned an illness that can be very abstract into something concrete. It allowed for readers who might not fully grasp how depression works into seeing the disease as a real obstacle in a person’s path. If people get anything out of this book, it will be that depression it is not just an imaginary illness in a person’s head, but a real tangible presence that they fight daily against.

And, I think, that is the beauty of Warga’s novel. The reader really connects with Aysel, with her wry humor, her love for her little brother, and how much she struggles with the slug that she fights daily. The reader knows that Aysel is a beautiful soul and really wants her to recognize her worth so she won’t continue to think about suicide, but is still willing to go on the journey that Warga lays out as Aysel begins to question her decision with Roman. The novel takes place over a span of 26 days, with each chapter counting down, and we are not privy to Aysel’s decision to live or die until almost the very end. And when she does, well…you just have to read the novel to find out.

Jasmine Warga’s debut novel is a beautiful and touching story about depression, family, friendship and love. It’s about answering the tough questions we have about ourselves, our place in our family and our world, but mostly it is about discovering and owning our own self worth. The messages and themes that My Heart & Other Black Holes explores is one that people of all ages can learn from and relate to.

Recommendation: If you are in the mood for a story with heart, run to the store and buy My Heart & Other Black Holes now!

One Reply to “Book Review: My Heart & Other Black Holes”