Summer is officially here and it’s time for some beach reads. What will you be reading? If you haven’t decided, here is a new release that you could take. 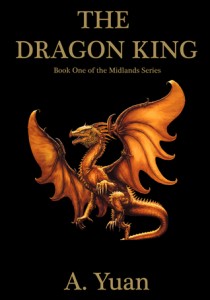 The Dragon King (The Midlands, #1) by Alda Yuan
Mithras Books

Safire has lived within a community of dragons for five years, ever since a band of raiders wiped out her village. When the King of Argrisia declares war on all remaining dragons, her community is forced to flee and she finds herself traveling with a small band of warriors to seek an oracle. Each of the five companions has their own secrets, which are revealed one by one as they travel. Safire finds that she is a changeling and has already developed the ability to transform into a dragon at will. When they reach the oracle, Safire is told that she may play a role in bringing the burgeoning conflict between dragons and humans to a peaceful conclusion. But her first step will be convincing her companions she can still be trusted in spite of her frightening abilities. Over the course of their journey to the dragon king’s mountain home on the orders of the oracle, all five travelers become united in their desire to see peace restored in the Midlands. But even peace will require sacrifice. — Cover image and summary via Goodreads