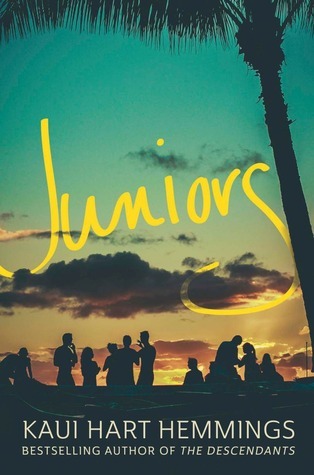 Summary: Lea Lane has lived in between all her life. Part Hawaiian, part Mainlander. Perpetual new girl at school. Hanging in the shadow of her actress mother’s spotlight. And now: new resident of the prominent West family’s guest cottage.

Bracing herself for the embarrassment of being her classmates’ latest charity case, Lea is surprised when she starts becoming friends with Will and Whitney West instead—or in the case of gorgeous, unattainable Will, possibly even more than friends. And despite their differences, Whitney and Lea have a lot in common: both are navigating a tangled web of relationships, past disappointments and future hopes. As things heat up with Will, and her friendship with Whitney deepens, Lea has to decide how much she’s willing to change in order to fit into their world. [Image and summary via Goodreads]

Review: Juniors is pretty much the perfect spring fling type of book. It’s the kind of book I’d expect to read when the weather’s warm, the sun’s out, and I’m chilling outside.It’s a book filled with luxury, surfing, romance, and, well, more surfing.

The heroine of Juniors, Lea Lane, moves to Hawaii for the last half of her junior year of high school with her actress-on-the-rise single mother. At the start, Lea’s having a hard time adjusting to her new school, setting down roots and making friends. When her mother gets invited by her rich friends to move into their cottage, Lea strikes up a friendship with the friend’s daughter Whitney and starts crushing on Whitney’s brother Will.

Throughout the book, you get a combination of Lea’s life in Hawaii — local culture, beach houses, trekking to the ocean — and her inner struggles. Like any teenager, she’s struggling to figure out who she is, how she fits in, and who her friends are. Her awkwardness, snarky remarks, and her hot-and-cold relationship with her mother were vividly depicted. Lea’s voice is strong throughout the book.

At times, her voice felt a little too real. Lea is certainly not perfect. She has insecurities a-plenty, including ones where she cringes at being thought of less than her rich friends, or viewed as like a maid or a foster child (hello, classism). She regards places that are frequented by locals as kind of sketch, and, like her peers, makes offensive jokes. It was hard to tell whether this was meant to show Lea as a realistic and flawed teen, or meant to be read surface-level (yikes).

Once you move past that — which can be kind of tough — it’s an enjoyable journey with Lea. The book left me wanting to head out to the beach, enjoy the sunset, and live life. The strength of Juniors mostly centers on Lea and her mother, which is one of the best mother-daughter relationships I’ve read in a while.

Ultimately, Juniors was a fun read. Check it out if you want a mostly-light read to pass the time!