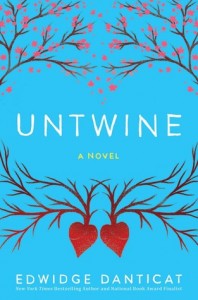 Summary: Sixteen-year-old Giselle Boyer and her identical twin, Isabelle, are as close as sisters can be. They are each other’s strongest source of support even as their family life seems to be unraveling and their parents are considering divorce. Then the Boyers have a tragic encounter that will shatter everyone’s world forever.

Giselle wakes up in a hospital room, injured and unable to speak or move. She doesn’t know what’s happened to her sister, to her family, to herself. Trapped in the prison of her own body, Giselle must revisit her past in order to understand how the people closest to her—her friends, her parents, and above all, Isabelle—have shaped and defined her. Will she allow her love for her family and friends to buoy her and lead her on the path to recovery? Or will she remain lost in a painful spiral of longing and regret?

Review: Much talk has been made, erroneously, that YA literature  is not literary enough and for all those folks, I’d suggest they pick up Untwine as Danticat’s novel is the epitome of a moving literary character study novel. It is the story of sisterhood, tragedy, family and ultimately healing. The writing is very chewy, like enjoying a gourmet meal.

While I ultimately enjoyed the novel and was moved by the story, the pacing was a little slow and the beginning, due to the structure of the novel, took a bit to get to. The novel begins with the accident that lends Giselle in the hospital and her time in the hospital. However, because Giselle is in a coma like state, the first quarter of the novel is spent in her mind, which creates a sort of stream of consciousness feel to the novel. That is also when we experience Giselle and Isabelle’s relationship as Giselle spends much of her coma reflecting on the past. She is able to see and hear her doctor and her family members, but she can’t interact with them. And because of that, it seems for the first part of the novel, there is very little movement within the plot and I can understand how some readers would be thrown off by that. Since I’m not a fan of stream of consciousness stories, I will admit that I struggled a bit and was concerned that the novel would be entirely in this style. It isn’t and the plot begins to move forward when Giselle finally wakes up.

It is at that point that the novel focuses on dealing with loss and the eventual steps towards healing. It is also when I fully began to connect with Giselle. I will fully admit that I cried during Isabelle’s funeral as Danticat fully tapped into the pain and sense of loss that Giselle’s entire family was feeling, but more so with Giselle who feels like she has lost a part of herself, a part of her identity. Giselle also struggles with survivors guilt as she also has to come to terms with a life without her sister. She even questions her existence because if her twin is dead, is she still a twin? This existential question that Giselle faces (and the title of the book alludes to) is what makes this novel such an interesting literary character study. And ultimately, what makes this a good read.

Even though I struggled to get into the story, I was deeply moved by the end and even shed a few tears. To me, if a novel brings actual tears to my eyes, then the author has done an excellent job of connecting me to the characters, making me think, but most importantly making me feel. It is the ability to make my heart wrench of her characters is why I love Danticat’s writing and was so excited for this novel. And I was definitely satisfied.

Lastly, on a completely shallow note, I absolutely adore the cover. It is just absolutely beautiful.

Recommendation: If you are a fan of literary character study novels, this is the book for you.