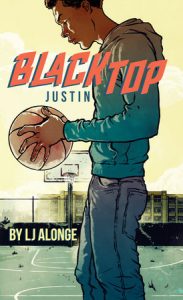 Summary: Justin has a list of goals stashed under his mattress. Number 1 is “figure out life plans.” Number 5 is “earn Zen Master rating in WoW.” Nowhere on that list is “play the crew from Ghosttown,” but that’s the type of trouble that always seems to finds him.

The debut title from LJ Alonge’s new basketball series pulses with action on and off the court. With wit, humor, and honesty, Justin unfolds over one hot summer in Oakland, California.

Review: L.J. Alonge’s debut novel is a short and fun read following Justin and his friend Frank as they try to build a basketball team to play against one of the best teams in the neighborhood when neither young men has any real skill. Justin sees the task of playing the dominating team as a consequence of a dare gone completely wrong and is complacent in the face of imminent failure. Along the way, however, he learns about the power to friendship and teamwork, skills his estranged father had been teaching him during their one-on-one pick up games.

I had read this novel was great for middle school students and low level readers and I have to agree with this assessment. Blacktop #1 is an enjoyable read that I know would catch many of my reluctant readers, whom are usually boys, with the sports angle and get them interested in reading.

The strength of Alonge’s debut lies in the voice of Justin who is that adolescent on the brink of adulthood, with a young man’s body (he’s 6’4” after a growth spurt), but has a kid’s playful mind and sense of humor. In addition, Justin is not just an aspiring basketball player, he is also a bookish nerd who loves comic books and science fiction/fantasy novels. He is a good student, top of his class in fact, and is proud of his smarts. He doesn’t try to hide them, but wishes that because of his height, he could be the basketball star as well. I love that Alonge chose to create a character who has other thoughts than basketball and is actually a bit nerdy. Black nerds, specifically boys, are not portrayed very often in literature and if they are they are always an Erkel stereotype. Justin is a real kid, in fact he reminds me of many of my students who were tall gangly goofy kids who would get in arguments about who was better, Superman or Batman.

It is because of Justin that I think, no believe, that Alonge’s novel could turn a young kid who struggles with reading into a person finds pleasure in the written word.

Recommendation: If you know a geeky sport loving kid, get them this book!