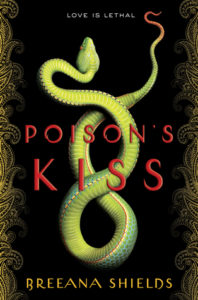 Summary: Marinda has kissed dozens of boys. They all die afterward. It’s a miserable life, but being a visha kanya, a poison maiden, is what she was created to do. Marinda serves the Raja by dispatching his enemies with only her lips as a weapon.

Review: I was a little hesitant to read and review Breeana Shield’s debut novel because I’ve been in a #ownvoices kind of reading mood since that cold day in Nov. but since the book I really wanted was not at the store, I chose this Poison’s Kiss. The premise was intriguing and fantastical, which appealed to me because I love nothing more to get lost in a fictional world that is so unlike my own. And while I did read the book quickly and got caught up in the story, I was left with wanting more. I couldn’t figure out what it was and then it hit me…the world building of the story could have been better.

While I don’t know much about Indian folklore so I’ll leave that critique to someone smarter than me as to how well Shield’s incorporated mythology and folklore into her novel, I do know about world building and where I find the story lacking. One of the aspects of the story that continually drove me crazy was establishing a time and place for the novel. The world that Marinda lives in, Sundari, is very different than our own, but I was somewhat confused as to the time period the novel took place. It seemed to be a mix of modern society and an pre-industrial society. For example, uses some modern sayings that don’t quite fit into the world Shield’s established. I feel like Shields couldn’t decide between being inspired by ancient and modern India so she combined the two, but it ended up being confusing because modern India is such a dynamic country and quite different than a colonized idea of India of old. I’m also a bit of a geography nerd when it comes to my entertainment, so when an author establishes that a city is two days travel for two characters, but then the characters make it back in a matter of hours, I get twitchy. I feel Shields does spend an significant amount of time establishing the mythology of Sundari and the beliefs of the people, which was really well done. I could see where her inspiration from Indian folklore blended into a mythology and folklore of her own making.

In her author notes, Shields states that she wanted to explore the idea of making a child an assassin, essentially taking away their choice for what they’d like their life to be, and that theme is perfectly explored here. Marinda is kept ignorant of who she works for and why, as well as other aspects of being a visa kanya and Poison’s Kiss is all about her awakening. While the impetus for her to start searching is her becoming “friends” with Deven, I feel like her search for self was beginning before she ever met him. Marinda is unhappy and filled with guilt over killing boys and young men, but does it out of love for her brother. She knows she is being manipulated but doesn’t see a way out. Her interaction with Deven is what actually makes her take action because he is the first person, aside from her brother, to show her kindness. I feel like this theme of ignorance trapping a person is wonderful metaphor for American’s current state of affairs. When one is kept in ignorance, the powers that be, and in Marinda’s case it is her handler Gopal, can convince people of anything. It is when one decides to search for their own answers that one becomes free. And Poison’s Kiss is ultimately about a girl who actively works toward getting her freedom.

Recommendation: Despite it’s flaws, Poison’s Kiss was an entertaining read, and I intend to read the sequel.