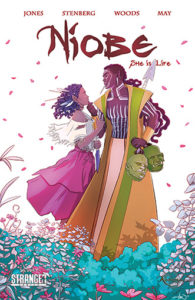 Summary: “What becomes of the child who has lost her spirit?”

NIOBE: She is Life is a coming of age tale of love, betrayal, and ultimate sacrifice. Niobe Ayutami is an orphaned wild elf teenager and also the would-be savior of the vast and volatile fantasy world of Asunda. She is running from a past where the Devil himself would see her damned… toward an epic future that patiently waits for her to bind nations against the hordes of hell. The weight of prophecy is heavy upon her shoulders and the wolf is close on her heels.

Review: Before I get into my review, I have to say that the Niobe: She is Life series is the first ever comic book I have ever purchased. I’ve read graphic novel adaptations of books, but never a comic book series and I was unsure of what to expect. That being said, I wonder if some of my feeling of “incompleteness” has to do with the storytelling structure of comics, or with the series itself. Therefore, I’m glad that I chose to buy the entire 4 book series instead of just the first issue, as I got a deeper understanding of the story with each subsequent issue.

Niobe: She is Life drops the reader in the middle of the story as Niobe is literally running for her life. We gather that she’s running away from her father, and that she wants to kill him, but we don’t know why. Intriguing way to start a story, definitely, with the hope that the rest of the series will fill in the blanks. It somewhat does, but also introduces some ideas that make the story a bit confusing. The comic takes place in a fantasy world called Asunda that is filled with all sorts of different humanoid species such as elves, dwarfs, orcs, mythological beings, and gods and goddesses. I was unsure how all the beings related to each other in the world as there was clearly tension between the young men of the monastery that Niobe finds herself in, however the series did hint at some war between the Orcs and the Elves that I wasn’t too sure was over or was still being fought, and this monastery was some sort of oasis for young people without a home. I feel like I would have love to receive a bit more world-building to the series to fully understand the mythology of the world, the different civilizations/peoples that exist in the world and how they all coexist amongst each other. Niobe is often called “She tribe” and aside from her being a young woman, I wasn’t exactly too sure why the young men called her that. Is that how all Elvish young women are called? Small details such as that, which I can understand might be hard to do in a comic series, would have helped with my enjoyment of the series. All of that said, I still did enjoy the series. The writing and storytelling got stronger with each subsequent issue and by the end I was truly rooting for Niobe.

Niobe is a quiet, but headstrong character who is discovering who she really is and what role she plays in the world. Because of her lineage, she is half-Elvish half something to be determined, she hated but at the same time feared. She is willing to stand up for what is right and is a fierce warrior. When Niobe finally accepts her destiny and gives in to her power, it is truly a great moment with a wonderful unexpected twist that I as totally here for. I loved seeing the main character, a woman of color, fully become and own being the hero to save the day. She is a character that fantasy comics so desperately needed so I’m glad that Stranger Comics decided to publish this series.

Lastly, I must mention the artwork..it is absolutely stunning. The colors are bright and rich which visually brings the world of Asunda to life. Not only is Niobe an intriguing story, the series is also a work of art. Ashley A Woods whose depictions of all the different types of people, their costumes, the animals, the deities, etc, are so detailed and beautiful that it makes the world very real. Woods artwork gives Asunda a mystical quality, almost, as there are many scenes where her brush strokes makes the reader feel as if we are looking at an old world before time.

Recommendation: Overall I enjoyed the series and am looking forward to the sequel that is to come. I will definitely by the next series. And if you want to support WofC authors and artists creating powerful heroines, then go out and buy this comic (buy all 4 issues!)

One Reply to “Comic Review: Niobe: She is Life”