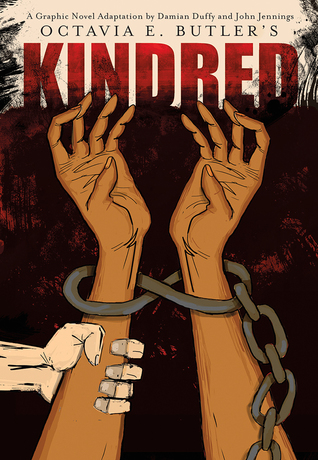 Summary:  More than 35 years after its release, Kindred continues to draw in new readers with its deep exploration of the violence and loss of humanity caused by slavery in the United States, and its complex and lasting impact on the present day. Adapted by celebrated academics and comics artists Damian Duffy and John Jennings, this graphic novel powerfully renders Butler’s mysterious and moving story, which spans racial and gender divides in the antebellum South through the 20th century.

Butler’s most celebrated, critically acclaimed work tells the story of Dana, a young black woman who is suddenly and inexplicably transported from her home in 1970s California to the pre–Civil War South. As she time-travels between worlds, one in which she is a free woman and one where she is part of her own complicated familial history on a southern plantation, she becomes frighteningly entangled in the lives of Rufus, a conflicted white slaveholder and one of Dana’s own ancestors, and the many people who are enslaved by him.

Held up as an essential work in feminist, science-fiction, and fantasy genres, and a cornerstone of the Afrofuturism movement, there are over 500,000 copies of Kindred in print. The intersectionality of race, history, and the treatment of women addressed within the original work remain critical topics in contemporary dialogue, both in the classroom and in the public sphere.

Frightening, compelling, and richly imagined, Kindred offers an unflinching look at our complicated social history, transformed by the graphic novel format into a visually stunning work for a new generation of readers.

Review: Kindred is not generally tagged as young adult, but it will likely be a cross-over title and it was one I wanted to read for our focus on women in graphic novels this month. Dana, the main character, has just turned twenty-six when the main action begins so it’s not about teens, but Dana’s a young woman and is interacting with a variety of young people. It’s a book that deals with slavery through the eyes of a relatively contemporary person and it shows aspects of slavery and racism through multiple perspectives. Dana’s beliefs about slavery are challenged as she lives among enslaved people. Things are not as clear-cut as she had thought. Dana learns about what she’s willing to do to survive and finds herself doing things that go against her ideals.

This book also deals with interracial relationships. The relationship Dana has with her white husband is simply incomprehensible to the people on the southern plantation 30+ years before the Civil War. A white man using the body of a black woman is accepted, or at least ignored by whites, but a white man loving a black woman is somehow shameful. Even in the 1970s, Dana and Kevin’s marriage isn’t fully accepted by some of their own family members. This issue, among many many others, highlights the fact that slavery affected everyone involved and those effects lasted throughout generations.

In some ways, the graphic aspect of this adaptation added to the original story. The visuals keep the pacing quick and definitely bring the action to life. Some of the scenes are extremely painful to see and increase the emotional impact of the events and interactions. In other ways though, this format wasn’t quite as powerful as the novel. For this to work, the text had to be streamlined and while the overall story line remained intact and the main ideas are all there, some of the more subtle aspects were missing or just not as clear. I was glad I’d read both so my brain could fill in some of the blanks. For those who have never read Butler’s works before, this would be a great introduction that would likely lead readers to want more. Those familiar with Kindred will probably enjoy the adaptation, but may find it lacking a little of the depth.

Recommendation: Get it soon. This graphic novel adaptation is one more way to experience an amazingly powerful story from Octavia Butler.