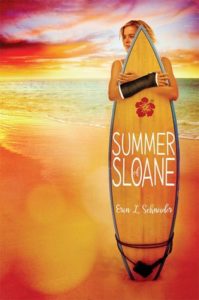 Review: If you’re looking for a book to take with you on vacation this summer, look no further than Erin L. Schneider’s Summer of Sloane. It is an engaging contemporary romance that starts off with two bombshell scenes about Sloane’s best friend’s and boyfriend’s betrayals. As a reader, Sloane’s anger, confusion, and betrayed feelings were things I easily sympathized with. I’m glad Sloane had a network of family and friends to help support her while she struggled to figure out what to do with her fractured relationships, though I do wish we had seen more of Sloane’s relationship with her mother and with Mia.

Some of the best scenes in the novel are when Sloane ponders the things she’d lost and tries to figure out where she should go from there. Summer of Sloane is all about the messiness of life, establishing boundaries, and coming to terms with the fact that sometimes the people we love deeply are just as deeply flawed. Schneider did a great job of describing the emotional rollercoaster Sloane was on throughout the book and exploring the many ways Sloane was and wasn’t handling everything that had been thrown her way.

The developing romance between Sloane and Finn was fun, and they had a pretty natural progression from acquaintances to friends to significant others. I liked their banter and the way they could get each other to open up with the things they were each struggling with. I was less enthused with Finn failing to give Sloane more space during their rockier moments (to the point where I half wished Sloane would handle him like she had Tyler just so Finn would back off), but I did like where the two of them ended up.

I do have a few nitpicks about the lead-in to the finale, but they’re all spoilery. Suffice it to say, I was bothered by what I viewed as the disparity between Mick’s and Tyler’s resolutions. That isn’t the way I had hoped things would go, and I feel as if Mick got the raw end of the storytelling. In spite of that, I appreciated the generally optimistic tone of the ending and felt that it did well by Sloane’s character.

Recommendation: Get it soon if you’re looking for a fun summer vacation read. Despite a few specific-to-me nitpicks, Summer of Sloane was a good contemporary romance about love, forgiveness, and growing up. It should definitely make its way into your TBR pile if it hasn’t already.

Interview at Next Page Please