Everyone, please welcome debut author Janelle Milanes to Rich in Color! Janelle’s book, THE VICTORIA IN MY HEAD, came out yesterday: 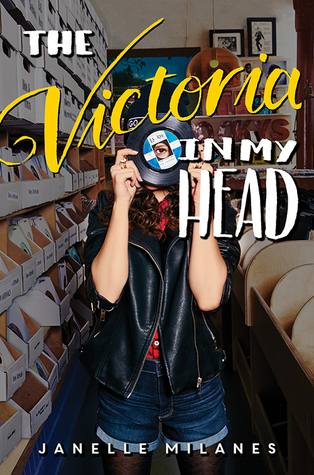 We’re thrilled to have Janelle here to talk about her new book. Once you’ve finished reading the interview, don’t forget to enter the giveaway! It is open to both U.S. and international readers.

Both you and Victoria are Cuban-American. How have your experiences growing up as a second-generation Latina influenced Victoria’s character? What is her relationship like with her family?

There’s an added layer of pressure that I felt growing up as a second-generation Latina. In the book I wrote that you feel like you’re playing catch-up with everyone else, and I think that holds true. Because I didn’t necessarily start with the same advantages as a lot of my peers, my family made additional sacrifices so I could succeed in the future. In my case, I couldn’t help but feel the weight of those sacrifices in everything I did. There’s this idea that you have to do “better” than your parents, whatever that might mean. After all, if you waste your life away, what was the point? Why did they give up everything to come to this country? That was my mindset, at least, while I was growing up. It makes for a volatile, stressed out teenager. Victoria’s family didn’t just want her to meet the same expectations as the elite, they wanted her to surpass them.

Victoria clashes with her parents quite a bit throughout the story. It was important to me that I made her parents sympathetic and showed that their point of view was just as valid as Victoria’s. They expect things from their daughter, but they ultimately want her to find happiness. The problem is that Victoria and her parents have different, conflicting ideas of where happiness comes from. I think that’s a common immigrant mentality as well–the practical notion of happiness as stability. The problem is when stability becomes monotony, which it did for Victoria. She finds herself craving the opposite of what her parents feel is right for her.

Tell us more about Victoria’s school and why you decided to have her attend the Evanston Academy.

Evanston is made up of a very privileged, elite student body. These kids grew up with the assumption that they can do whatever they like in life–unlike Victoria, who doubts herself and her abilities at every turn. I wanted to turn up the pressure on poor Victoria as much as possible so she’s getting it not only from her family, but she’s surrounded by it all day every day.

Toward the end of high school, I was given the chance to attend a renowned college prep school on scholarship. I had always considered myself an intelligent person, but when I started this school I realized I was now playing in an entirely different league. I was coming in as a total rookie. From that point on, my life revolved around work and college. I worked my butt off to stay afloat and it took a toll on my emotional well-being, like it did for Victoria. It was challenging, but looking back, I’m grateful I had the chance to get that education. I can appreciate it in retrospect, as lost as I had felt in the moment.

Strand sounds like he could be a fun character. What can you tell us about him and his relationship to Victoria?

Victoria is immediately attracted to Strand as soon as she lays eyes on him. He’s such a departure from her carefully curated world and the people she’s used to being around. I think Victoria is intrigued by Strand because he appears to be the opposite of her shy, neurotic, sheltered self. She lacks the confidence to make a move on him, so she decides to wave him off as cocky and annoying instead. A lot of their story involves Strand chipping away at the wall she puts up between them. I had so much fun writing all their sexual tension that eventually gives way to a close, personal connection.

You have a Spotify playlist for THE VICTORIA IN MY HEAD. What about the book did you want to capture in those songs? Which songs are your favorite?

It’s a rock-focused playlist because I liked the juxtaposition of this seemingly quiet girl who, on the inside, is all crashing drums and thrashing guitars. I put a lot of work into picking the songs that went into Victoria’s playlist. Every song fits the chapter with which it’s paired, so you have the option of listening along while you read.

My favorite songs would have to be Mitski’s “Your Best American Girl”, because it captures the idea of straddling two cultures and trying to fit this American ideal. The song also has a raw, authentic feel that I just love. I also have a fondness for “Debaser” by the Pixies. It’s so wild and nonsensical and fun.

If you could be in a rock band, which role would you want to have?

I can totally see the appeal of being a lead singer (assuming, in this hypothetical, that I could actually sing!) I am a bad ass lip syncher in the privacy of my bedroom. But if I’m being semi-realistic, I think I’d be better suited for something like bass guitar. I could be the mysterious bass player who’s in it purely for the music.

THE VICTORIA IN MY HEAD is your debut novel. What has surprised you most about gearing up for your release date?

What’s surprised me most is how slow the publishing process moves. I wrote Victoria years ago at this point and have written two other unpublished books in the meantime (one of those will come out in 2018!) It feels strange to revisit these characters after having had so much time and distance from them. I didn’t realize how much I missed them!

A recent read I’d recommend is WHEN DIMPLE MET RISHI by Sandhya Menon. It’s a thoroughly charming romantic comedy about two Indian-American teens whose parents conspire to arrange their marriage. I also read all of Jenny Han’s books, because she’s fantastic.

As for books I’m looking forward to reading? So. Many. I’ve had very little time to read lately, but currently on my 2017 TBR list is THE FIRST RULE OF PUNK by Celia C. Pérez, STARFISH by Akemi Dawn Bowman, and THE EDUCATION OF MARGOT SANCHEZ by Lilliam Rivera. Oh, and THEY BOTH DIE AT THE END by Adam Silvera. Oh, oh, and SAINTS AND MISFITS by S.K. Ali! Okay, I’ll stop now…

Is there anything else you’d like to tell us about THE VICTORIA IN MY HEAD?

I hope readers will really connect to Victoria–particularly the daydreamers who spend a lot of time living in their imaginations. (Honestly, it’s usually more fun in there anyway.) But I do hope THE VICTORIA IN MY HEAD will inspire people to pursue their happiness in the present moment while trusting that the future will take care of itself. It’s an important lesson, and one I’m still working on every day. 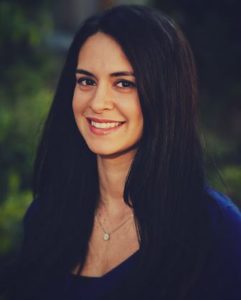 Janelle Milanes is originally from Miami, FL and received her BA in English Literature from Davidson College. A lifelong YA addict, she moved to New York for her first job as a children’s literature associate at Simon & Schuster.

For the past five years, Janelle has worked as a teacher and librarian throughout the New York City area. THE VICTORIA IN MY HEAD is her first novel and reflects many of her own experiences growing up as a second-generation Latina in America.

Janelle currently lives in Brooklyn with her husband and their two cats. Her favorite Disney princess is Belle, since she was also a big book nerd.

Janelle has graciously offered a signed copy of THE VICTORIA IN MY HEAD, plus an enamel vinyl record pin and print with the book title, to one our readers! You can enter the giveaway through the widget below. This giveaway is for both U.S. and international readers. It will end at midnight Eastern time on September 26.

One Reply to “Interview with Janelle Milanes + Giveaway”