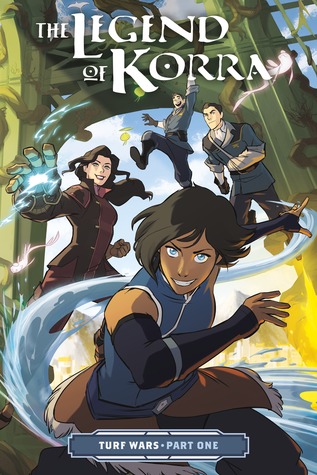 Summary: Relishing their newfound feelings for each other, Korra and Asami leave the Spirit World . . . but find nothing in Republic City but political hijinks and human vs. spirit conflict!

A pompous developer plans to turn the new spirit portal into an amusement park, potentially severing an already tumultuous connection with the spirits. What’s more, the triads have realigned and are in a brutal all-out brawl at the city’s borders – where hundreds of evacuees have relocated!

In order to get through it all, Korra and Asami vow to look out for each other – but first, they’ve got to get better at being a team and a couple! [Image and summary via Goodreads]

Review: I’ll admit that the only reason I knew Legend of Korra was getting a graphic novel continuation was because I started following the illustrator (@kohquette) on Twitter for her cat pictures. When I found out after the fact that a queer Asian martial artist would be illustrating Korra, I immediately went and stuck it on my pre-order list because what! So cool.

The Legend of Korra: Turf Wars picks up where the cartoon ended. Major spoilers for the TV show ahead, so this is your chance to skip to the next, spoiler-free paragraph! Anyway, it begins with Korra and Asami holding hands and starting their romantic vacation in the Spirit World. All does not go according to plan — that goes for how people react to Korra and Asami’s relationship, and how Republic City is dealing with its very own spirit portal. Harmony is still far out of reach, and Korra has a lot on her plate as the avatar.

I’ll be the first to say that while I love Avatar: The Last Airbender and Legend of Korra, it’s not without its flaws. I didn’t manage to watch A:TLA until I was an adult because, as a middle schooler, I ragequit when I first heard that the moon princess’s name was… Princess Moon (Yue is moon in Chinese and painfully mispronounced in the show). The fact that the shows used Chinese as sloppy flavor text — Firefly, much? — and predominantly white voice actors for a heavily Asian-inspired world has always bothered me. But still, the shows were funny, the art looked cool, and it was Asian representation — ish.

That being said, I love where Legend of Korra is heading now. Queer Asian couple front and center? Yes, please. The art style is gorgeous, and I could spend hours just gazing at each of the panels. And, I love getting to see what happens next to the gang post-series. There will always be a spot in my heart for the Korra crew.

If you watched the Legend of Korra series and liked it, you definitely should pick up Turf Wars. I can’t recommend the art (and plentiful Korrasami) enough. I’ll for sure be keeping Part Two on my radar.