A good number of books are coming out tomorrow (3/6)! Which of these is on your to-read list? I know I’m definitely looking forward to Children of Blood and Bone…

The Beauty that Remains by Ashley Woodfolk

Music brought Autumn, Shay, and Logan together. Death wants to tear them apart. Autumn always knew exactly who she was—a talented artist and a loyal friend. Shay was defined by two things: her bond with her twin sister, Sasha, and her love of music. And Logan always turned to writing love songs when his love life was a little less than perfect.

But when tragedy strikes each of them, somehow music is no longer enough. Now Logan can’t stop watching vlogs of his dead ex-boyfriend. Shay is a music blogger struggling to keep it together. And Autumn sends messages that she knows can never be answered. Each of them wonders: How different would my life be if this hadn’t happened? And now that it has . . . what’s next?

But everything changed the night magic disappeared. Under the orders of a ruthless king, maji were targeted and killed, leaving Zélie without a mother and her people without hope. Now, Zélie has one chance to bring back magic and strike against the monarchy. With the help of a rogue princess, Zélie must outwit and outrun the crown prince, who is hell-bent on eradicating magic for good. Danger lurks in Orïsha, where snow leoponaires prowl and vengeful spirits wait in the waters. Yet the greatest danger may be Zélie herself as she struggles to control her powers—and her growing feelings for the enemy.

Restore Me (Shatter Me #4) by Tahereh Mafi
Juliette Ferrars thought she’d won. She took over Sector 45, was named the new Supreme Commander, and now has Warner by her side. But she’s still the girl with the ability to kill with a single touch—and now she’s got the whole world in the palm of her hand. When tragedy hits, who will she become? Will she be able to control the power she wields and use it for good?

The Poet X by Elizabeth Acevedo
A young girl in Harlem discovers slam poetry as a way to understand her mother’s religion and her own relationship to the world. Debut novel of renowned slam poet Elizabeth Acevedo.

Xiomara Batista feels unheard and unable to hide in her Harlem neighborhood. Ever since her body grew into curves, she has learned to let her fists and her fierceness do the talking. But Xiomara has plenty she wants to say, and she pours all her frustration and passion onto the pages of a leather notebook, reciting the words to herself like prayers—especially after she catches feelings for a boy in her bio class named Aman, who her family can never know about. With Mami’s determination to force her daughter to obey the laws of the church, Xiomara understands that her thoughts are best kept to herself.

So when she is invited to join her school’s slam poetry club, she doesn’t know how she could ever attend without her mami finding out, much less speak her words out loud. But still, she can’t stop thinking about performing her poems. Because in the face of a world that may not want to hear her, Xiomara refuses to be silent.

After the Shot Drops by Randy Ribay
A powerful novel about friendship, basketball, and one teen’s mission to create a better life for his family in the tradition of Jason Reynolds, Matt de la Pena, and Walter Dean Myers.

Bunny and Nasir have been best friends forever, but when Bunny accepts an athletic scholarship across town, Nasir feels betrayed. While Bunny tries to fit in with his new, privileged peers, Nasir spends more time with his cousin, Wallace, who is being evicted. Nasir can’t help but wonder why the neighborhood is falling over itself to help Bunny when Wallace is in trouble. When Wallace makes a bet against Bunny, Nasir is faced with an impossible decision—maybe a dangerous one.

Hero at the Fall (Rebel of the Sands #3) by Alwyn Hamilton
When gunslinging Amani Al’Hiza escaped her dead-end town, she never imagined she’d join a revolution, let alone lead one. But after the bloodthirsty Sultan of Miraji imprisoned the Rebel Prince Ahmed in the mythical city of Eremot, she doesn’t have a choice. Armed with only her revolver, her wits, and her untameable Demdji powers, Amani must rally her skeleton crew of rebels for a rescue mission through the unforgiving desert to a place that, according to maps, doesn’t exist. As she watches those she loves most lay their lives on the line against ghouls and enemy soldiers, Amani questions whether she can be the leader they need or if she is leading them all to their deaths.

Pacifica by Kristen Simmons
Marin is cosario royalty, a pirate like her father and his father before him. Sailing the ocean to chase adventure is in her blood. But these days no one cares that the island town her people call home is named after her grandfather. They have a new leader, one who promises an end to their hunger – and one who thinks that girls are meant for the kitchen or the brothel. Marin knows she’s meant for more than that, and with the sudden influx of weapons on the island, and rumors of a pending deal with the enemy oil nation in her wake, she knows a big score to gain the council’s favor is the only way to save her people, and herself. 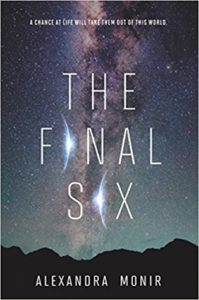 The Final Six by Alexandra Monir
When Leo and Naomi are drafted, along with twenty-two of the world’s brightest teenagers, into the International Space Training Camp, their lives are forever changed. Overnight, they become global celebrities in contention for one of the six slots to travel to Europa—Jupiter’s moon—and establish a new colony, leaving their planet forever. With Earth irreparably damaged, the future of the human race rests on their shoulders.

In this cutthroat atmosphere, surrounded by strangers from around the world, Naomi finds an unexpected friend in Leo. As the training tests their limits, Naomi and Leo’s relationship deepens with each life-altering experience they encounter. But it’s only when the finalists become fewer and their destinies grow nearer that the two can fathom the full weight of everything at stake: the world, the stars, and their lives.

– Images and summaries via Goodreads