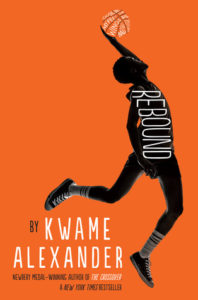 Rebound (The Crossover 0.5) by Kwame Alexander

Before Josh and Jordan Bell were streaking up and down the court, their father was learning his own moves. In this prequel to Newbery Medal winner The Crossover, Chuck Bell takes center stage, as readers get a glimpse of his childhood and how he became the jazz music worshipping, basketball star his sons look up to. [Image and summary via Goodreads]