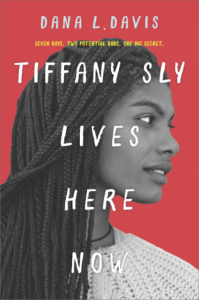 Summary: For sixteen-year-old Tiffany Sly, life hasn’t been safe or normal for a while. Losing her mom to cancer has her a little bit traumatized and now she has to leave her hometown of Chicago to live with the biological dad she’s never known.

But Tiffany has a secret. Another man claims he’s Tiffany’s real dad—and she has only seven days before he shows up to demand a paternity test and the truth comes out. With her life about to fall apart all over again, Tiffany finds herself discovering unexpected truths about her father, her mother and herself, and realizing that maybe family is in the bonds you make—and that life means sometimes taking risks.

Review: Dana Davis’ debut novel was another one of those novels where I had planned to take my time reading it, but ended up reading very quickly (I even took it to YALLWEST to read). I was so emotionally involved in Tiffany’s transition to her new life in Los Angeles, her new family and all the challenges that came with it.

Tiffany’s voice is the main reason why Davis’s novel is so good and why people will connect with her. Tiffany is being thrust into a brand new world with a father she’a never known, and 4 sisters. The stress from leaving every thing you know and love to the unexpected would be stressful on anyone, but Tiffany has OCD and anxiety on top of it. I was not expecting this characterization of her, but I found it to be one of the most compelling characteristics. Not that mental illness is a characteristic, but mental illness is not often explored in YA, and I found Tiffany’s portrayal realistic. The way Davis writes how Tiffany’s anxiety manifests and how she works to control her anxiety made me really feel for her. Her struggle to contain her anxiety while dealing with a difficult situation, and a difficult father, really showed the mental and emotional toll mental illness can be for a person. I greatly appreciated that Tiffany was a Black character struggling with mental illness because it is not often talked about in the Black community and often the solution is to talk to clergy, or rely on faith, which is extremely unhealthy.

And this brings me to an aspect of the book that somewhat troubled me – the concept of religion. Tiffany’s new family is Jehovah Witness and I feel like the religion was partly the antagonist in this novel, which made me wonder how JW teens would perceive this novel. I know that Jehovah Witness is a controversial religion (Full disclosure: My paternal grandmother was JW, which conflicted with my Catholic upbringing) and that some people have had bad experiences with the religion. My concern was that I wasn’t too sure if the backwards beliefs & actions of Tiffany’s “father” was of his own or was from his religious beliefs. Anthony Stone comes off as a bigoted jerk who is so strict in his household that it almost borders on emotional abuse. I truly hated him for the way he treated Tiffany and her sisters and in turn ended up having a negative view of the Jehovah Witness belief because Anthony used religion as his reason for most of his actions. If I had this reaction and I know a bit about the Jehovah Witness religion, I worried that someone who had no exposure would not get a balanced view of the religion, or someone who is JW would be offended by seeing their belief system portrayed in such a manner.

Overall, I really enjoyed Davis’s novel. It was heart-breakingly funny at moments, all the characters felt real, and moments that were truly touching. I experienced all of Tiffany’s emotions and really connected with her. I feel like Tiffany’s story is one that needed to be told as her life was another view of Black life, one that is not seen very often in media and is valuable. I hope other teens, specifically Black teens, who are struggling with mental illness see themselves in Tiffany and then seek out help like she did.