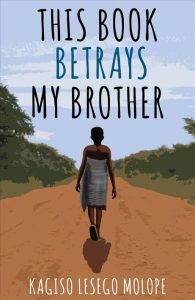 Summary: “Basi is as special as raindrops on dying crops. I say this not with jealousy but with apology, really; an honest, heartfelt and heartbreaking apology coming from a sister’s guilt. It is my way of explaining him and what he did lest you judge him too harshly after you listen to what I am about to tell you …”

All her life, Naledi has been in awe of Basi, her charming and outgoing older brother. They’ve shared childhood laughter, secrets and alliances, the quirks of their parents, and stories of the adventurous boys from Kasi. At thirteen, Naledi is beginning her own adventures: Kitsano asks her to the matric dance, and she revels in a flurry of excited anticipation. Then, unexpectedly, Naledi sees Basi in an act that contradicts everything she believes about him

Set in the shifting South African landscape of the mid-1990s, this nuanced coming-of-age story explores the bonds of sibling love and loyalty, and a young woman’s role in a complicated world.

Review: Slowly but surely more YA books from outside the US are being published here and I am ready for it. Kagiso Lesego Molope’s “This Book Betrays My Brother,” originally published in South Africa, is evidence that we need books that give us a window into life in another country. Molope’s novel gives us a glimpse of the lives of privilege Black South Africans, specifically what life was like in the first years after apartheid ended. The novel focuses on Naledi’s emergence into womanhood as she navigates romantic relationships, old and new friendships, and deal with living in the shadow of a superstar brother. Additionally, she desires to follow the rules set by her strict mother but also wants to be a modern girl enjoying her teenage years. To add to all of this turmoil her life, Naledi’s brother, whom she’s always been close to, has drifted away from her spending more time with his friends and his new girlfriend. What I enjoyed most about this novel is that Naledi felt like one of my students which just shows that the turbulent lives contemporary teenagers live is universal. Sometimes Naledi could be a brat to her brother which really warmed me to their relationship and really emphasized the heartbreak that she feels when she witness her brother commit a heinous act. At that point, everything Naledi has believed in is called into question and she must chose between following her family or doing what is right. I felt for her and while I disagreed with her ultimate decision, Molope spent a significant amount of time exploring all the nuances of Naledi’s life that you understand how the decision she makes and how it changes who she becomes as an adult. “This Book Betrays My Brother” is a deeply moving story that explores all types of love (family, friends, romantic) and how complicated these relationships can be.