Everyone, please welcome Catherine Faris King to Rich in Color today! Catherine’s debut, The Ninety-Ninth Bride, is out this week. (And would you look at that cover by Reiko Murakami? I love it!) We’re thrilled to have Catherine swing by and talk to us about her debut and Arab representation in American media. 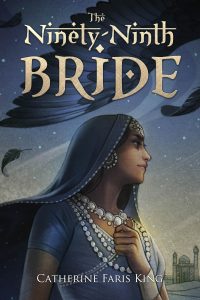 “Sister, would you please tell me a story?”

Dunya is fifteen when her father, the Grand Vizier, gives her over to the mad Sultan for his bride. Ninety-eight Sultanas before Dunya have been executed, slaughtered at the break of dawn following their first night with their new husband. But on her own wedding night, the ninety-ninth bride finds help from the mysterious and beautiful Zahra, who proposes to tell the Sultan a story…

The Ninety-Ninth Bride is a story of sisters and magic, and a kingdom on the brink of disaster.

When I was a senior in high school, we had a new teacher at the school. I won’t name her because everyone deserves a second chance. And besides, my friends who lived it already know who I mean. I was talking with her at the doorway of her classroom one day, and I brought up something about the outbreak of violence in the Middle East, and she said something that stuck with me. She said, “Well, you know those people. They’ll be violent no matter what, you can’t help them.”

She gave my elbow an awkward kind of tickle and walked away. I spent the rest of the day repressing the urge to give my elbow a good scrub in the nearest sink.

Her tone was so reasonable, so practical.

The representation of Arabs in American media is in a sorry state. On television, Arab-Americans are lucky to exist, and lucky to be played by actors of the appropriate ethnicity. Move things to the Arab world, and you’re lucky to find tragic victims. You’re likelier to find black-clad terrorists. Dangerous, wrathful, sly, irrational. That’s how it’s been for a long time now–look to Jack Shaheen’s 2006 documentary “Reel Bad Arabs.”

So where do I come in?

My business is fiction. I wrote a short story some years ago, a subversive take on The Arabian Nights, or Alf-Layla wa Layla. The original story focuses on a woman named Scheherazade who spins tales of wonder and enchantment, in order to delay her execution at the order of her husband, the Sultan. A couple of years after publishing the short story, the Book Smugglers asked me to turn it into a novel. I agreed in about a minute, and here we are.

Another Arab-American writer may have kindly turned down the offer, for any number of good reasons. Plenty of such writers would want to get away from genies and bellydancers. Arabs across the world have a thousand and one more interesting things to talk about than a hodgepodge of vaguely “Eastern” stories. Not to mention that frame story–thanks a lot, long-gone storyteller, for giving us a brutal Arab man who murders his way through Act I. And Scheherazade, lying, dissembling, talking in circles–we don’t need another enigmatic Easterner.

Those are all good reasons. But none of them occurred to me. I had a story that I wanted to tell, and I dove in, like a foolhardy explorer.

I have loved the story of Scheherazade since I first read about it, in poem form, as a child. Scheherazade is a master of inner strength. She brings peace to a kingdom by telling stories and holding up her head in the face of death. That’s the seed that inspired me; my novel, The Ninety-Ninth Bride, makes some changes (maybe a lot of changes… you’ll have to read the book to find out!) but the seed is the same.

I also had an agenda to bring a little more Arab representation to the world. I wanted to represent Arabs as people, with disappointments and friendships and all the fiddly details that go into an ordinary life. For this novel, I narrowed in on a story that can best be told in Arabia. Other writers might craft stories where the fact that the main character is Arab is more incidental. Both choices have much to recommend them; both help to foster empathy and understanding.

Writing The Ninety-Ninth Bride was partly an exercise of me hashing out what I had learned from writers like Naomi Shihab Nye and Rabih Alameddine. My book is not a story of war, but it is a story of an unjust rule. It is a story about soft power and listening, the story of a girl who thinks herself powerless but learns to take matters into her own hand. And, of course, it is about the effect of stories. We writers love that theme; it gives us all hope.

I don’t plan on going away anytime soon, so I will have more novels to continue to express my  point of view– Lebanese-Irish, bisexual, the whole experience. I’ve always been interested in the representation of Arabs and Arab-Americans– although I haven’t always had the words to articulate my thoughts– and it’s fitting that my first novel contributes to that conversation. 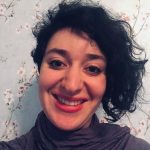 About the author: Catherine Faris King is a Lebanese-Irish-American writer. She would like to thank her parents and friends for their endless support. This is her first book.

About the artist:  Reiko Murakami, also known as Raqmo, is a U.S. based fantasy illustrator.  Her work focuses on depicting emotions through surreal abstraction on a subject. Her art has been published in Spectrum, Infected by Art, ArtOrder Invitational: The Journal, Exposé, 2D Artist and many others.