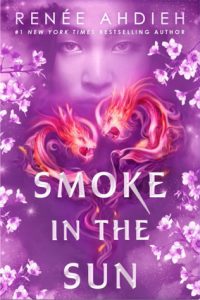 Summary: For weeks, seventeen-year-old Mariko pretended to be a boy to infiltrate the notorious Black Clan and bring her would-be murderer to justice. She didn’t expect to find a place for herself among the group of fighters—a life of usefulness—and she certainly didn’t expect to fall in love. Now she heads to the imperial castle to resume a life she never wanted to save the boy she loves.

Ōkami has been captured, and his execution is a certainty. Mariko will do what she must to ensure his survival—even marry the sovereign’s brother, saying goodbye to a life with Ōkami forever.

As Mariko settles into her days at court—making both friends and enemies—and attempting Ōkami’s rescue at night, the secrets of the royal court begin to unravel as competing agendas collide. One arrow sets into motion a series of deadly events even the most powerful magic cannot contain. Mariko and Ōkami risk everything to right past wrongs and restore the honor of a kingdom thrown into chaos by a sudden war, hoping against hope that when the dust settles, they will find a way to be together.

Set against the backdrop of feudal Japan, Smoke in the Sun is the breathless, romantic, not-to-be-missed fiery conclusion to a spell-binding adventure.

Review: Prior to reading Smoke in the Sun, I re-read Flame in the Mist and fell in love with all the characters all over again. This made me really excited for the sequel as I was already immersed in Ahdieh’s beautiful and magical feudal Japan. I can definitely say I was not disappointed and feel that Smoke in the Sun is a wonderful and satisfying conclusion. And like Ahdieh’s “Wrath & Dawn” duology, I was sad to leave it and left with wanting more.

The novel picks up just days after Flame in the Mist ended, therefore it begins with a sense of urgency. Ōkami’s execution is imminent and Mariko must find a way to save him in time. This time, we get a different Mariko, but not in a bad way, as we get to see the palace lady that she was brought up to be. Mariko uses the skills she was taught to navigate the palace court, specifically dealing with the Empress. She still is her quick-thinking, smart self, but this time she knows when to speak her mind and when to play the dutiful lady. I especially loved those scenes because we are privy to Mariko’s thought processes as she really thinks before she speaks, often choosing her words carefully for her advantage. She plays the long game in this novel as she desires to bring about change in her country by doing it the best way she knows how. I loved Mariko in the first book, but to me, she really shines in this sequel.

Ahdieh also added some character POV’s, specifically Yumi and Prince Raiden, which I found to be welcome additions to the story. Their chapters added much depth to the novel as we were able to experience life in the palace and the capital city from someone who has lived there most of their lives. Their point of views really balanced out the narrative and allowed us to see Mariko, Ōkami, and the Black Clan in a different light. It also gave a richer picture to all the crazy happenings in the love which added to the tension and the exciting ending of the novel. In addition to writing these wonderful characters, the world-building is again amazing. Ahdieh is so skillful with her setting descriptions that I could clearly imagine all the locations the characters travelled to. Additionally. The “demons” that she added were horrifying in their own unique way and I really felt the despair Prince Raiden felt at seeing them. Ahdieh expanded the world in this novel, much like she did with the Rose and the Dagger and like that novel, this wider world came very much alive.

Renee Ahdieh again writes a beautiful novel filled with characters that you grow to love and a world that is filled with the fantastical. If you haven’t yet read this series, then you need to run to your nearest bookstore and pick both of these novels up. You will not be disappointed.