Everyone, please welcome Swati Teerdhala to Rich in Color! Swati’s debut novel, THE TIGER AT MIDNIGHT, is out today, and we are thrilled that she was able to stop by to answer our questions about her book!

THE TIGER AT MIDNIGHT sounds so exciting! Tell us more about Esha and her life as the Viper.

Esha is the leader of The Crescent Blades, the main rebel group in Dharka that’s committed to bringing balance back to the Southern Lands and getting rid of the false king on the Jansan throne. The Viper was a persona she created as she went on missions as a spy and it’s a pretty lonely life, actually. While she really believes in what she does and she loves it, the Viper is sent on missions that are particularly dangerous or require a special touch. By the start of The Tiger at Midnight, that loneliness and separation from her team is beginning to weigh on her.

Kunal has trained to be a soldier since childhood. What can you tell us about his relationship to his uncle, a general, and the government he’s loyal to?

Kunal has a complicated relationship to his uncle and the King, though he doesn’t quite realize it. His uncle took him in after the death of his mother and he’s always tried to be the best soldier for his uncle. That includes sticking his head in the sand sometimes when it comes to the King he works for and the Red Fort he is part of. Meeting Esha starts this journey of realization and awakening for Kunal, one in which he can’t ignore all of the horrible things his uncle and the King have done.

Can you introduce us to the other major players in THE TIGER AT MIDNIGHT?

Sure! Though you don’t meet him in this book, King Vardaan casts a large shadow over all the events of The Tiger at Midnight. He’s the one who usurped the throne in a coup ten years prior and set the whole war between Jansa and Dharka in motion.

Kunal sets out with a group of soldiers–Rakesh, Amir, and Laksh–to find the Viper after the murder of his uncle. While Kunal and Laksh are best friends, Kunal isn’t so friendly with Rakesh. He doesn’t trust him at all. Amir is just along for the ride, more interested in the story than in actually finding the Viper.

Esha’s team, who you meet later in the book, are her found family. Harun, Arpiya, Bhandu, Farhan and Aahal. I can’t reveal too much about them without spoiling, so I’ll just say to keep an eye out for them!

What are some of the stories or characters from Indian history and Hindu mythology that THE TIGER AT MIDNIGHT draws from?

I pulled from a number of stories rather than one in particular and there are a lot of “easter eggs” within the novel and the trilogy as a whole. I based the magic and history of the land around the story of the Ganga (Ganges) river and how it was brought down to the earth.

What did you enjoy most about building the world of THE TIGER AT MIDNIGHT?

It was so much fun to pull from the stories I grew up with and to do in-depth research on India and its ancient history. I actually really enjoyed the research and weaving together those threads with my own imagination.

I saw that THE TIGER AT MIDNIGHT is your debut novel. Can you tell us a bit about your journey to publication as an author of color?

I’d been writing and querying without much success for a while when I first heard of #DVPit. The bi-annual Twitter pitch contest for diverse and marginalized authors was really the turning point for me in my publishing journey. My first time pitching didn’t result in representation but I built a great community of writers who I still am friends with to this day. My second time around was after I had written The Tiger at Midnight and this time, my pitch received a lot of interest and a month later, I signed with my agent. About six months later, I went on submission and sold The Tiger at Midnight. I don’t think I’d be here without #DVPit, for a number of reasons!

So many! I’m particularly excited for Rogue Heart by Axie Oh, With the Fire on High by Elizabeth Acevedo, Wicked Fox by Kat Cho, Spin the Dawn by Elizabeth Lim, There’s Something about Sweetie by Sandhya Menon, Don’t Date Rosa Santos by Nina Moreno, Symptoms of a Heartbreak by Sona Charaipotra, A River of Royal Blood by Amanda Joy, and SO many more!

Is there anything else you’d like to tell us about THE TIGER AT MIDNIGHT?

The Tiger at Midnight is my homage to the myths and stories I grew up with as an Indian-American child and I’m still absolutely over the moon that I get to write a fantasy world that reflects my heritage. I hope you enjoy it! 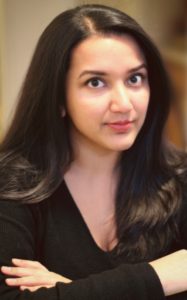 Swati Teerdhala is a storyteller and writer. After graduating from the University of Virginia with a B.S. in Finance and History, she tumbled into the marketing side of the technology industry. She’s passionate about many things, including how to make a proper cup of chai, the right ratio of curd-to-crust in a lemon tart, and diverse representation in the stories we tell. She currently lives in New York City.

2 Replies to “Interview with Swati Teerdhala – THE TIGER AT MIDNIGHT”