We are so excited to have Nandini Bajpai on our blog today to talk about her latest book, A MATCH MADE IN MEHENDI: 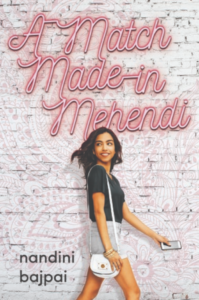 The synopsis for A MATCH MADE IN MEHENDI really grabbed my attention! Can you tell us more about the matchmaking Simi uses—and turns into an app—in the book?

Simi has watched her mother and aunt match people all her life and has definitely picked up on their methods. They judge compatibility by paying attention to shared values, priorities, and aesthetics instead of more superficial qualities. To quote from the Shagun Matchmaking Guide, the book passed down in Simi’s family, “Common sense can help judge the suitability of a match. Ask yourself: Do they agree on what’s right, what’s important, and . . .what’s funny?” Simi implements this by creating quizzes and memes for her peers to answer and rate in her dating app. The answers are run through an algorithm designed by her tech savvy brother and that’s how the app finds matches. It’s like automating the very hands-on approach of her foremothers with a lot of help from modern technology.

Simi sounds like a fun character. What did you enjoy most about writing her?

Simi was a fun character to write and it was interesting to try to understand her and be in her head. She did respect her family history but had to push back and test their methods in her own way. I liked her loyalty to her friends and family and how she tried to defend others instead of being a bystander. I also loved how she decided that she did not need permission from anyone to try and make an impact and leave her own mark in the world. It’s hard to make the choice to be your authentic self when it doesn’t fit other people’s idea of cool, and I enjoyed writing about her doing that.

Simi is an artist, and one of the art forms she uses is mehendi. What can you tell our readers about mehendi?

Mehendi, also known as henna, is a form of body decoration that is tightly linked to many ancient customs and traditions in South Asia and other regions where it is grown. The paste used for mehendi comes from the leaves of the mehendi plant…we had a mehendi hedge in a house I lived in growing up in India and I have great memories of mehendi at so many weddings and festivals. Simi is a talented artist and experiments with using mehendi in non-traditional ways for her art. She loves the organic feel of the mehendi dye and the link to her cultural heritage and is inspired to create with it. It also plays a role in finding her own match!

Besides Simi, who are the other major characters in the book? Please give us a brief introduction to them.

Well, there’s Simi’s best friend Noah. He and Simi have been friends since kindergarten and he nudges her to try the app at school to get people out of their perceived lanes and connect with each other. Both Simi and Noah would like to find and date the perfect boy. There’s Navdeep, Simi’s brother, the tech whiz behind the app. He doesn’t look like he’s paying attention, but he always has her back. And Aiden and Suraj…Simi’s crushes, not saying which one she’s with in the end. There are all the couples that Matched! app pairs up too. And there is Amanda, the girl who thinks she deserves all the things she wants, including the most popular boy in school.

Finally, there’s Simi’s extended family including her mom, aunt, and grandmother—the senior matchmakers in the family—and her twenty something cousins Geet and Preet who have absolutely no interest in the family matchmaking tradition.

If you could make an app that would go viral like Simi’s, what would the app be for?

I was asked that question before and my idea was to have an app that could take the list of books you love and tell you what book to read next, but my editor Nikki Garcia came up with a better idea–an app that could find your perfect match based on comparing both your book lists!

According to your website, A MATCH MADE IN MEHENDI is your first U.S. book, but you’ve published before in India. Have you noticed any interesting differences between the two industries?

There are so many differences! In India the young adult genre is very new and right now YA books kind of fall in the crack between children’s books and adult titles, though this is changing. The length of time it takes to go from a manuscript being acquired to being in print is much shorter there. There is no School and Library market for children’s books there yet and very few review journals. There are lots of regional languages apart the national language, Hindi, so the English language market is relatively small. Literary agents are rare too. I could go on…

Right now the books at the top of my (very large!) 2019 TBR pile are The Downstairs Girl by Stacey Lee, Dear Haiti, Love Alaine by Maika Moulite, Patron Saints of Nothing by Randy Ribay, and Internment by Samira Ahmed. I’m also looking forward to The Light at the Bottom of the World by London Shah.

Is there anything else you’d like to tell us about A MATCH MADE IN MEHENDI?

I’d just like to say that A Match Made in Mehendi is a happy, feel-good read that celebrates desi culture and centers joy and I think it’s very important to have books about POC that do that! 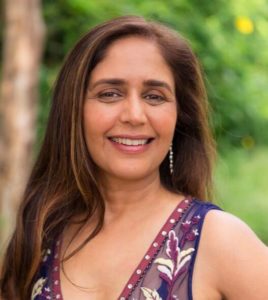 I grew up in New Delhi, India, one of four sisters and many cousins in a family that liked to read. I lived and worked in India, Australia, and the US, before settling in the Boston area with my husband, kids, and a fluctuating number and variety of pets. Although I’ve been a bookseller, systems analyst, TEDx organizer, PTO Mom, animal foster and more, my first love is writing.